UPDATE: Ok, let’s talk about why all of the stuff revealed by Catherine Herridge in the tweet copied below is important.

First, there is nothing illegal about the practice of “unmasking” in and of itself. It is standard procedure in Democrat and Republican administrations alike for officials to make these requests so that they can better understand briefings and other documents they are attempting to digest. So, it’s all probably legal, and every one of the 39 Obama officials named in today’s release had proper authorization to “unmask” General Flynn for these specific purposes and for their own use.

The scandal here is that many of the people on this list were engaging in unmasking not only General Flynn but a wide variety of U.S. citizens, not for their own internal, private use, but in order to be able to broadcast this information throughout the Obama Administration and cause it to be leaked, either by themselves or others, to willing accomplices within the corrupt news media.

Look at these documents copied below, and note the flurry of activity that took place on December 14 and 15. Fully 35 of the 39 Obama officials who appear on this list made an unmasking request on those dates. Why do you think that is the case?

Well, it’s most likely because that was right at the time when then-Director of National Intelligence James Clapper issued an order that dramatically broadened the number of agencies and levels of employees with whom this information could be shared by the requesters.

Remember that? Prior to that order, government officials were very restricted in sharing this information with others in the government. Obviously, that restriction was there in order to protect the U.S. citizens who were the subjects of the unmasking efforts.

But Clapper – almost certainly acting on direct orders from Obama himself – took care of that, and as a result enabled the creation of a mountain of leaks that we saw during the Trump transition.

That’s the biggest part of this scandal.

But there’s more. For one thing, consider the fact that that flurry of activity on the 14th and 15th took place two full weeks before Flynn’s infamous phone call with Russian Ambassador Sergey Kislyak on December 29. Remember: It is that call that Comey/McCabe/Strzok, et all at the FBI have always claimed as the event that triggered their suspicions about Gen. Flynn. This list proves that is all just another lie, and that the Obama coup cabal was targeting Flynn much earlier.

Also, think about the nature of the names you see on this list. The person with the most requests is Samantha Power, who was the Ambassador to the United Nations. What in the hell was the UN Ambassador doing making such numerous requests specific to General Flynn?

And what in the world was going on at the U.S. Treasury Department? You had no fewer than 6 Treasury officials feeling the need to unmask the designated incoming National Security Advisor. Why?

What do you think motivated the President’s own Chief of Staff, Denis McDonough, to make an unmasking request on January 5? Could have been because that was the exact day on which Obama held that meeting with his national security team, and then afterwards took James Comey and Sally Yates aside to specifically talk about the operation to entrap Flynn? Could be. Seems likely.

Finally, what possible legitimate reason would the outgoing Vice President of the United States have to unmask General Flynn on January 12, 2017, just 8 days before he was to leave office. At the very least, shouldn’t Mr. Biden be asked that question by every corrupt journalist who interviews him from now until November 3? If Biden were a Republican, we all know that would certainly happen.

So, the fallout from this specific release of documents is not going to be that anyone is going to jail for doing this. The fallout is that it demonstrates once again the organized effort at the highest levels of the Obama Administration to hamper the Trump transition team, an effort that continued after Trump had assumed office.

The impact to Biden is that it clearly shows once again that he was personally involved in these efforts. There is little question that this revelation will only serve to amplify efforts by many Democrats to prevent him from becoming the nominee. This man is already operating in an atmosphere in which a new poll out this week shows that 30% of Democrat voters still do not expect him to ultimately be nominated at the party’s convention. That percentage will grow because of today’s revelation, especially when you factor in the fact that just yesterday, Biden denied any knowledge about any of this on national television.

One reader asked earlier if this might trigger Bernie Sanders to reactivate his own campaign. That’s a good question, one that most likely hinges on whether Sanders has already been bought off to get out of the race like he was in 2016. If nothing else, his price might suddenly go up. 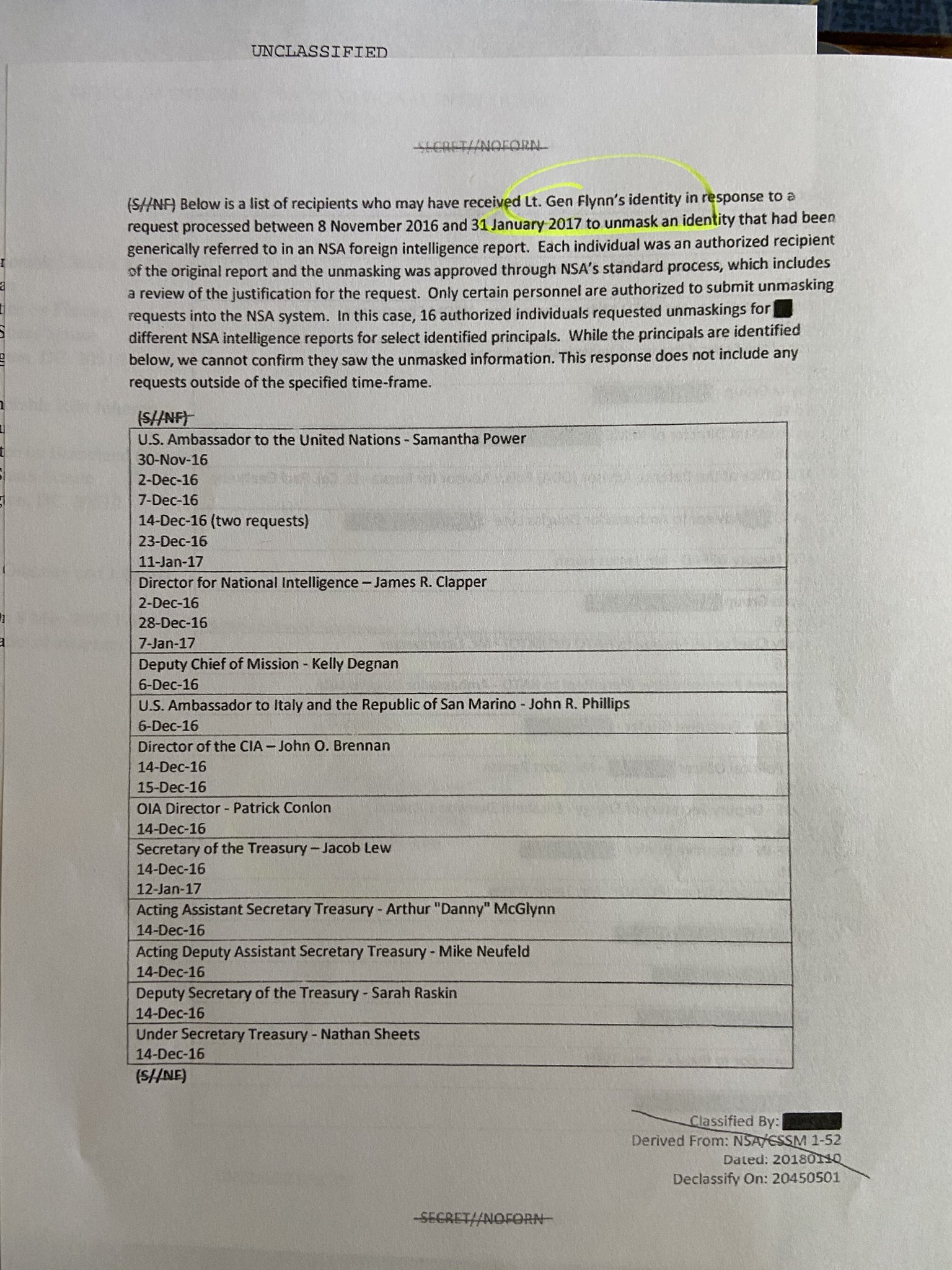 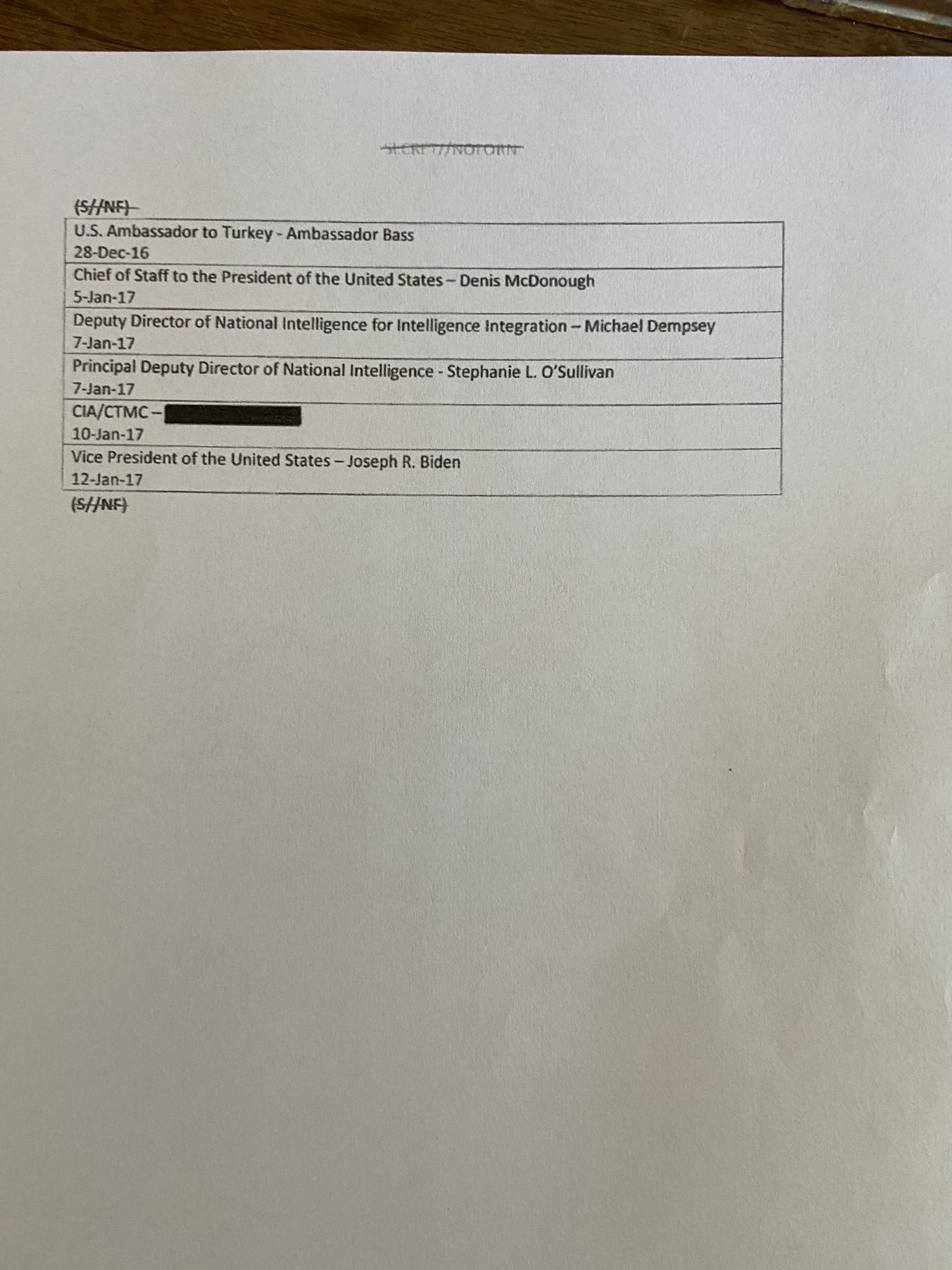 What was Obama’s beef with Flynn? It seems to go beyond professionalism into a personal grudge, turning the entire administration loose on Flynn.
Obama fired Flynn from his security position.
Then had everyone unmask on him.
Then apparently when he had an opportunity to talk with Donald Trump, he tells Trump he doesn’t trust or doesn’t like Flynn.
Then he has the FBI, apparently as an ongoing project from holdovers from his administration go after Michael Flynn
This seems like some kind of personal grudge that Obama set out to destroy Flynn’s life.
Apparently, Flynn differed with Obama on his approach to Jihadist terrorists, and Obama is determined to destroy Flynn.
Flynn is being flayed by the American judicial system, which is performing at it’s worst, setting out to try and convict an innocent American citizen who gave his entire professional life in service to the United States.

Jimmy MacAfee
Reply to  Show me

Flynn planned to audit Intel. All of it. Lot of corrupt, off-the-books stuff. Money flowing.

We’ll see. Exposing these criminals and trying them are two very different things. I still can’t shake the feeling that indictments will never come. But I’d never be happier to be proven wrong!

Dave, Flynn wanted to audit the Intel agencies. This made him a target all by his lonesome.

I don’t usually post in the evening, but Ace has just written that Devin Nunes says criminal referrals at high levels are coming soon, including the Mueller goons like Weismann. And unlike the Tick-Tock-DiGenova brigade, what Nunes says is almost always the truth.

I will sleep better tonight just reading that.

Drip, drip, drip, crescendo to come. Meanwhile, it’s Grenell who controls the information, its release and the news cycle. I like all this just fine.

Grenell has really shown himself to be a strong patriot. President Trump did well picking him.

How does Catherine Herridge still have a job at SeeBS? She is a great reporter, and does solid reporting – Is she their token ‘journalist’ to retain some creditability?

Who was that other decent (CBS?) reporter who had her story spiked when it didn’t fit the narrative? Probably not related, but it is in my mind like a song you can’t remember the name to, so help me out please.

if you want a reason to not trust Wikipedia, just look at the entry on Attkisson.

Theres little reason to trust Wikipedia on anything really. Theres a trend there… more misinformation than factual information. Its a socialist, enlightenment magnet, like wading in a cesspool expecting to find something useful..

Lara Logan was another one who CBS shit-canned because she was too honest.

So when does the DNC make the switch? They can’t wait too long. And does Bernie now ‘unsuspend’ his campaign?

I guess we know now why Grenell hand-delivered those documents to Barr.

When’s the last time a V.P. was caught in a high-level criminal act? I guess Agnew, but that was for acts as Maryland governor, not sitting VP.

I guess if sundance’s theory is true, that Flynn was the actual target of the investigation, then technically this is not unmasking of an incidental person.

I don’t think Sundance is right about that.

He’s finished. And so is the entire cabal.