I decided not to cover this earlier in hopes Governor Abbott would decide to intervene, and sure enough, he just did.

Most are aware that a Dallas-area salon owner named Shelley Luther was sentenced to a week in prison yesterday by an abusive Dallas judge, after she defied Abbott’s order that her business was “non-essential” and opened it up briefly last week. Police intervened, cited her and ordered her to appear in court.

During her hearing on Tuesday, the judge in the case, State District Court Judge Eric Moye, agreed with her that the Governor’s order was technically unsupported by existing law. However, in a fit of pique after Luther emotionally told the judge she would not shut her salon down because she was trying to feed her children, the liberal circus clown – who was initially appointed to the bench by Texas’s last Democrat Governor, Ann Richards, in 1993 –  sentenced her to serve in a Dallas jail in which there have already been more than 200 cases of Wuhan Virus diagnosed.

That all happened late Tuesday afternoon, and I went to bed thinking that surely Governor Abbott would get involved here and act to reverse this idiotic decision, especially given the fact that, come 8:00 Friday morning, he is allowing salons like Luther’s to reopen all over the state.

Well, sure enough, at about 2:00 Wednesday, Governor Abbott issued this statement, which followed a previous statement issued by Attorney General Ken Paxton: 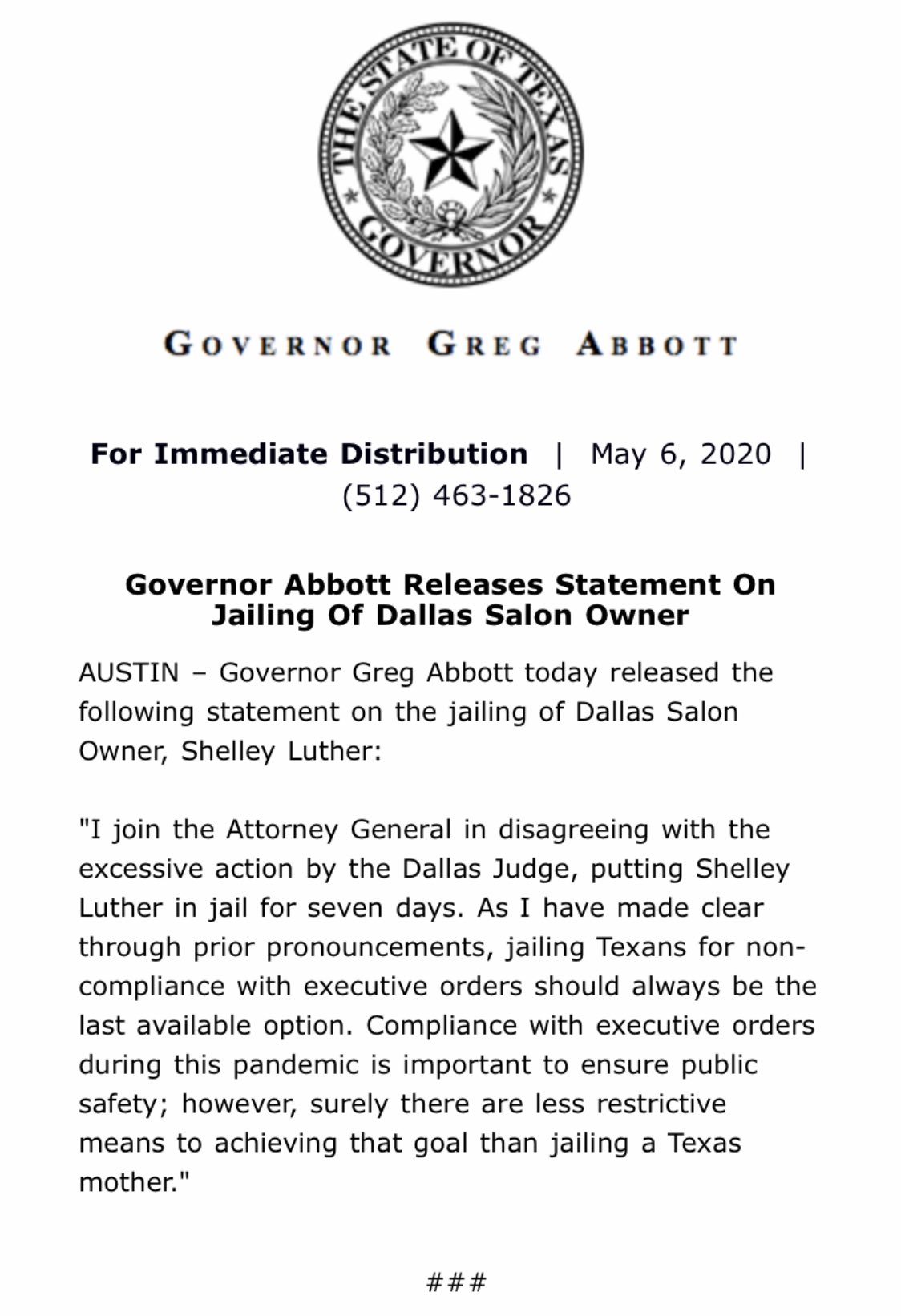 Paxton had earlier sent a letter to Judge Moye demanding that Luther be released from jail. As of this writing on Wednesday afternoon, Moye had not yet acted. If he has not relented before the end of the day, millions of angry Texans will expect further intervention by Abbott and Paxton.

Hopefully, Governor Abbott has learned a key lesson here: That even in the Red state of Texas, there are plenty of Democrat despots sitting around just waiting for an opportunity to abuse the citizenry if you open the door for such abuse. It was Abbott’s order in March that opened that door. He should keep that reality in mind if we end up seeing a second round of this Chinese plague in the fall.

And isn’t it treason to discard, disregard and abandon the Constitution, when everybody from judges to elected officials take their oath to uphold the Constitution? This is where they’ll be going:

Prophecy: one day soon, they’ll start taking that part of the oath out of swearing-in ceremonies.

If the Constitution is no longer valid, is it treason to overthrow a government no longer ruled by it? Just askin’.

Good to see your Texas governor is back on the beam Dave. It certainly looked touch-and-go there for awhile.

If he really wants to show you Texans real leadership he and his AG will send out a letter to every actual and potential local despot clarifying his new ‘guidelines’ to be followed regarding the enforcement of his virus EOs.

If Shelly Luther contracts the virus from being unjustly put in jail, I hope she successfully sues the judge into oblivion like the four members of the Duke Lacrosse Team did to that hack prosecutor form North Carolina – got him ‘resigned’ and got damages from him personally.

Another thing I want to see in the post mortem about this disease is a whole lot of successful lawsuits against every thug tyrant all the way down to individual police officers who damaged people economically, mentally and physically because of unconstitutional actions. They all take oaths? Don’t they?

Real governmental reform must take place at least along the lines in that state and local EOs can only be in effect for 48 hours before legislative action, i.e. an actual law or ordinance, must be signed into formal law. In other words, all state and local EOs expire in 48 hours meaning an emergency legislative session must be called to address any long term emergency.

The good lawyers in this country need to step up and do some pro bono work for real victims of government tyranny and not just the hacks who work for the ACLU and SPLC and the Hollywood hoity-toity crowd. That is, if they have a conscience, want to really do the right thing, and maybe improve the overall public impression of their profession. Or we could follow the Shakespeare admonition – especially in DC

Almost wish you hadn’t mentioned the Duke Hoax – because it was the best indication that both media and “higher” education were on a collision course with the American people, any sense of fairness and justice and the Constitution of the United States In my opinion, Nifong didn’t suffer near enough, nor did the idiot President of Duke – don’t get me started! The list of people who didn’t get what they deserved is too long to list.

Which is probably why some posters believe that no one in government is going to be punished for the Russia Hoax. Precedent.

As far as Ms. Luther goes: sometimes it takes a good woman to show men how to stand up and act like men.

Meanwhile there has been no pardon. Abbott talks a lot but “where’s the beef?”

I think they are giving this leftist dumbass one chance to right the ship. But, as we all know, their side will double down on stupid, and they will then intervene.

I’m not sure he can issue a pardon in this case. She has not been convicted of a crime. She is being held in contempt of court. I am not sure any governor’s power of pardon applies to this situation.

“She is being held in contempt of court.”

Reminds me of the old joke, when the judge asked the defendant: “Are you trying to show contempt for this court?” The defendant said:

“No your honor, I’m trying my best to hide it.”

PUT THAT F&**ING JUDGE IN JAIL.

Let’s see what Ms. Luther does with the GoFundMe money; hopefully she does the right thing.

Hopefully she won’t need it to pay her COVID treatment hospital bill. Pray.

I thought it was Paxton, but I guess credit goes to Abbott since he is the boss.

Either way, good to see some common sense prevail–there has been far too little of it lately. The judge deserves to be reprimanded.

Yes, as I pointed out, Paxton intervened first, then Abbott. We have to remember that Abbott himself was AG for more than a dozen years before becoming Governor, and will always initially defer to his AG to be the first to act in situations like this.

Makes sense. Now if he can just have a word with the budding fascists in Odessa….