Warning, Citizens: Your all-powerful Mayor, the heavy-handed and exalted by self-decree Lori Lightfoot, has now decreed that having a dinner party or family gathering is officially a “crime” in Chicago. You will comply or you will go jail. Period.

You don’t have to believe me, Citizens. Here is Mayor Lightfoot warning you directly, complete with subtitles:

Hey Liberals, take note of this video. This is exactly what you will get if your socialist plan comes to fruition!@realDonaldTrump pic.twitter.com/k9NZhmcsMr

So, be good Citizens, comrades, and obey the edicts of your Fascist State of Chicago.

Remember, Citizens, these other actions also now constitute decreed “crimes” in the Fascist State of Chicago:

– Walking your dog in a public park;

– Walking in a public park;

– Complaining about Mayor Lightfoot in a public park or the privacy of your home;

– Walking outside unless you are in transit to a state-approved location;

– Moving in public without wearing a mask;

– Going to work unless yours is a state-approved job;

– Running a business unless yours is a state-approved business;

– Any other action that constitutes normal human behavior of which Mayor Lightfoot personally disapproves, like being a Republican or watching Fox News.

Be good Citizens, comrades, and obey Mayor Lightfoot’s orders, or we will take you to jail. Period.

In other official Fascist State of Chicago News: Mayor Lightfoot has decreed that all Citizens between the ages of 13 to 25 must register for the Fascist State Militia and undergo thought reform and goose-stepping training. We are coordinating our thought reform messaging with the Democratic National Committee and Rachel Maddow.

The first approved goose-stepping class for registered Militia will take place Monday at Wrigley Field. New York City Mayor Bill de Blasio will be the special guest trainer for the week. Be sure to bring your autograph books. SPECIAL NOTE: Requesting autographs from Mayor de Blasio and Mayor Lightfoot will be REQUIRED.

Fear not, Citizens: Social distancing edicts will be observed during the training.

Warning: You must purchase your jackboots in advance of training. Official Fascist State of Chicago jackboots can be found at all state-approved grocery stores on what used to be the toilet paper aisles.

This concludes your official Fascist State of Chicago update for today. Be sure to tune into CNN for all the state-approved messaging on other topics of interest.

That is all, Citizens. 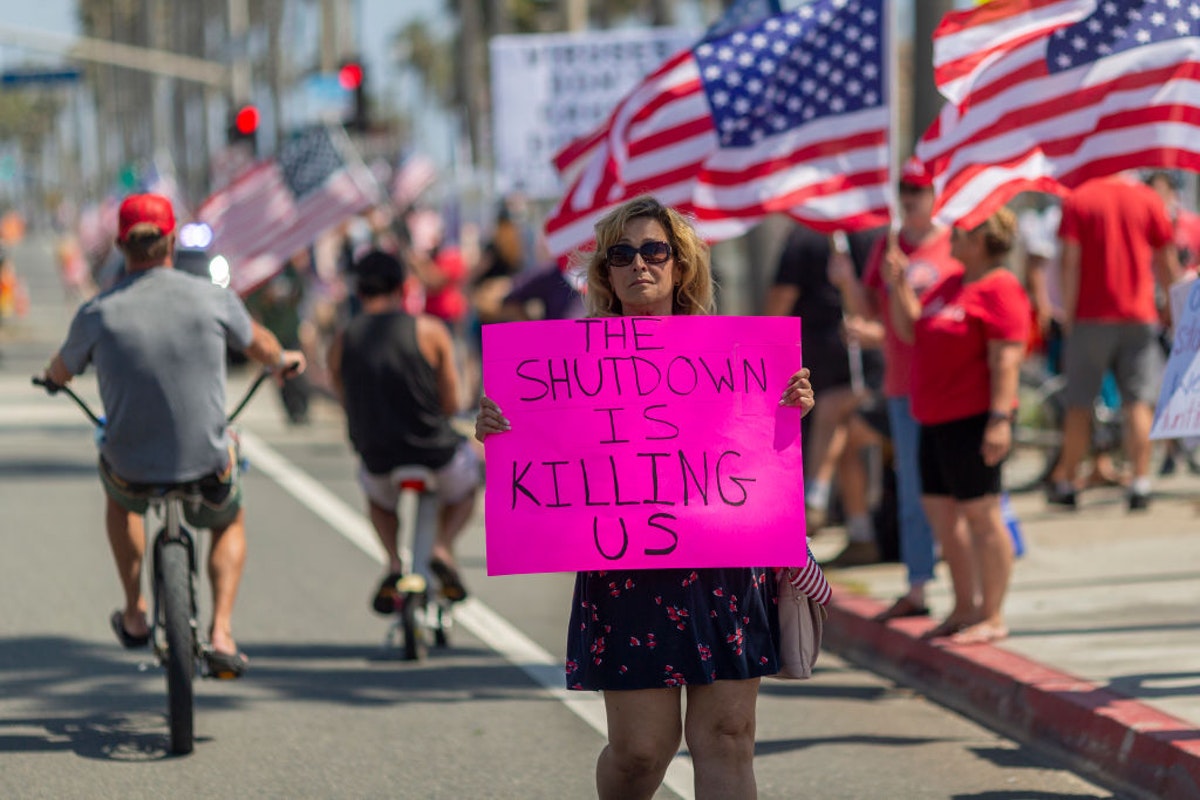 Speaking of Chicago Mayors and their quotes:

Daley, 1968 “The police aren’t there to create disorder, they’re there to preserve disorder”

This can also apply to Lori Lightweight. (What kind of a name is Lightfoot? It sounds like a ‘Native American, AKA Indian, name like Walking Eagle, Pocahontas, Sitting Bull, Little Mouth Always Dictating, Lieawatha).

Another Thought: When Trump intercedes, and lifts all these mayor’s and governor’s edicts, he’ll be viewed as a savior and reelected in a landslide

Poetic Justice will be his in 2021, and 2022, and 2023, when he goes to their states and campaigns against these despots like hell to make sure the victims of these fascists are reminded who locked them down and who ultimately unlocked them.

Didn’t think I’d ever see this in the US.

I think Oregon just extended the lock down until July 6th… THATS def not going to go well.

This is the most frightening thing I’ve ever seen come from a municipality in the Former United States of America:

“May 1, 2020
Kansas City, Missouri, officials are now requiring every church to submit a list of members and attendees along with their names, addresses and telephone numbers to city officials for tracking and surveillance purposes.”

Contact tracing. I hate to be a broken record, but they’re going to use this sh-t to turn us all into the Branch Davidians, and burn us down if they find it “necessary.”

AG Barr recently issued a warning to governors and mayors about infringement of individual constitutional rights and the overreach of governmental authority.

Hopefully Barr will move with a little more alacrity against these fascist dictators than he is doing “to find out what went wrong” in his department concerning virtually everything having to do with his boss from 2015 to present. We ought get that report “soon”.

Seriously, Barr, and the President, better have plans, real plans, and be ready to execute them to end this heretofore unheard of abuse of power and overreach, or there will be riots and death everywhere Blue Government rules. I’ll bet these when these protests turn ugly these politicians will have no problems forcefully putting them down.

I know, Trump probably won’t win any cities or states where this is happening except for Michigan – not hearing much about DeWine (R) in Ohio – regardless of what his does or doesn’t do. But right is right and at least some of these residents are Americans and deserve constitutional protection.

Where is the American Civil Liberties Union (ACLU) and the Southern Poverty Law Center (SPLC) filing lawsuits and getting injunctions against all these oppressors – I guess their favorite minority groups aren’t being “hardest hit”?

I guess injunctions and lawsuits are only for and to be used against Republican Mayors, Governors, and Presidents.

Proven frauds, all of them!!! If this were Trump doing this to these states and cities he would be blocked and sued.

Oh, and BTY, this hack mayor just won a runoff for a four year term last year. Is there ANY prominent Dictatorial Democrat up this year?

And I’m all for women in politics like Noem and Palin who are good serious competent executives and leaders, NOT rulers. My standards for voting for politicians are the same for male and female, black and white, gay or straight. But geez, isn’t it amazing how ugly (inside and out) ALL these Democratic women are from Walking Eagle all the way down the Democratic Party?

No Democratic politician’s platform is appealing to any conservative or clear thinking moderate, particularly these modern Day Eva Peron/Brauns/Marie Antoinettes, but these women are proving to be the real “extremists”.

They are real shining stars for the ‘women’s movement’ – sadly probably over half of the women in these “hellholes’ will vote for them again just because they have a…, are a woman

More evidence that the response has been hijacked by dictators, as the CDC lowers the actual numbers, the percentage of mortality lowered to below an average flu season; at a time when the real numbers are improving, but when the oppression increases it’s important that these issues are shown side-by-side:

Contrast. Stark. Contrast.
So as the two don’t match up; there should be more freedom, not less.

And the evidence is showing that MOST of these orders were unnecessary to begin with. Maybe the press will have to find something else to draw an audience; maybe they should look at the tyranny itself as a story. People will watch the news as certain mayors and governors are stripped of power, won’t they?

But if the news sides with these tyrants? They should be ridiculed, ostracized and run out of their positions, like Dan Rather and Brian Ross. Unfortunately, they don’t punish those who lie, cheat and obfuscate, only those who break the New Taboos, like Chris Matthews. But still, something has been gained: who can look at Rachel Madcow and Brian Stelter with even an ounce of respect?

Earlier there was at least some public health rationale for these policies. At this point it is entirely political–and most of it was from the beginning anyways.

These people are playing an extremely dangerous political game, one which threatens our national economic survival and cultural cohesion, and my guess is that they are going to regret it.

Might end up having to hire gangs for protection against city authorities; seems that they’re untouchable.