Going full-on Hitler is never a good look, Mr. Mayor. – Holy cow, it’s hard to even know what to say about this latest tweet from New York City Mayor Bill de Blasio. Just take a look at it and then contemplate its implications in the context of the long, sorry history of political leaders who have previously decided it was time to start “rounding up the Jews” in their own cities or countries:

My message to the Jewish community, and all communities, is this simple: the time for warnings has passed. I have instructed the NYPD to proceed immediately to summons or even arrest those who gather in large groups. This is about stopping this disease and saving lives. Period.

If nothing else, the utter and complete lack of self-awareness on display here is stunning, even shocking.

Of course, the media will try to studiously ignore this since de Blasio is a Democrat. But try to imagine the uproar that would justifiably resonate throughout the nation’s news media if such a tweet or statement targeting “the Jewish community” were to be issued by any Republican mayor, governor or member of congress. It would be epic.

And note that the use of the term “the Jewish community” betrays the fact that Mayor de Blasio views those of the Jewish faith to be somehow separate and apart from “normal” New York society.

This is LITERALLY HITLER, y’all.

Shocking. I don’t even know what else to say other than that.

UPDATE: By contrast, here is the tweet the Mayor issued to Muslims in his city last week at the beginning of Ramadan: 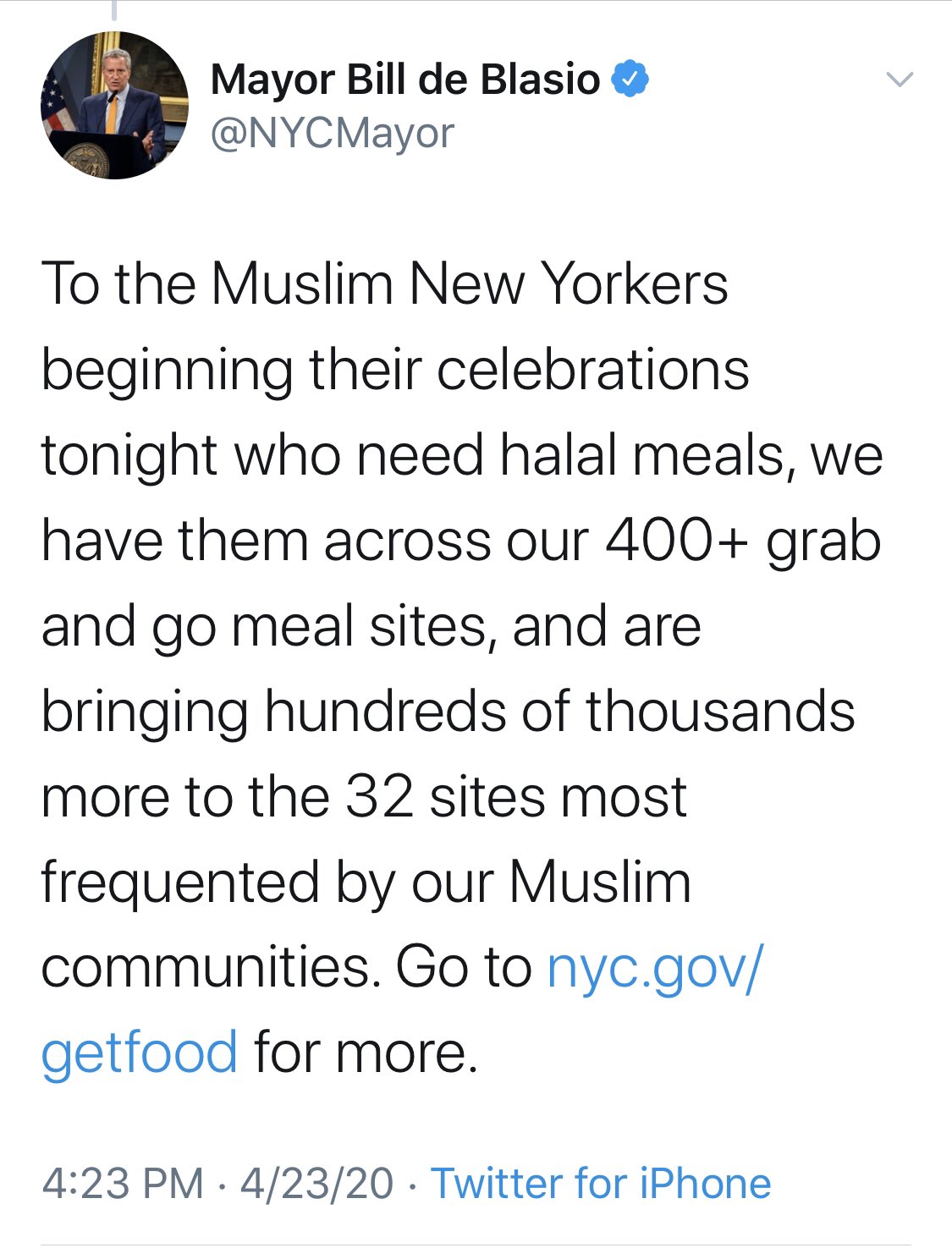 ummmm…doesn’t that look to you as if he is actually encouraging Muslims to congregate in large groups?

Daniel Greenfield recalls what he wrote in 2013:

“Bill de Blasio began his career in New York City politics with David Dinkins whose administration’s policies were responsible for the city’s first pogrom against the Jewish community of Crown Heights.

“Not long before Bill de Blasio joined Team Dinkins, he was a member of Team Sandinista.
The Sandinistas, or FSLN, a radical Marxist terrorist organization, took over the country and drove out most of Nicaragua’s Jewish community. By the time they were done, the ADL blasted Nicaragua as “a country without Jews, but not without anti-Semitism.”

Atheist Communists like DeBlowsio hate the Torah, they hate the Christian Bible, and they hate anyone who teaches, preaches or practicing any of these Holy Words.

LORD, I beg you to take this stinking man’s ability to harm our communities from him, and to give him what he intends for us, as Haman got what he intended for Mordecai.
amen

Jesus lives, and eventually DeBlowsio will come to meet Him when DeBlowsio passes from this world. Would not want to be in his shoes when that happens.

Satan always hates those whom G0D loves. G0D is not mocked, nor to be ignored, nor to be dismissed, nor to be made irrelevant. The CCP and De Blowsio and all the conspirators against Him will face a terrible judgement.

Somewhere I heard that one of America’s most recent protected minority (of ‘the One’s’ cult) isn’t suffering as much as others for the following reasons:

They keep their women bagged up and sequestered in their homes already and they wash their hands five times a day prior to their chants.

The government is trying to turn us into Taliban wives.

And one more, since this is a brilliant skewering of the Never-Trumpers:

Now watch the Left attack him; somehow I don’t think he will care.

This is spot-on satire:

That is exactly what the insipid phrase is about–empty, vapid posturing.

If I never hear it again it will be too soon.

Referring to your post on Trump using the DPA to protect the nation’s food supply:

This will be the tipping point when the FOOD supply goes the way of the March non-skid supply.

Everyone, especially the SJWs, and Snow-Flakes, will DEMAND an END to this COVID-19 Crap – plain and simple. The flakes and the pampered pu$$ys who make up the left will be the first to raise hell.

They and their ‘der leaders’ don’t give a Schiff about businesses dying in Red “Flyover” country, but when they can’t get food things will change bigly and very fastly.

Theoretically yes, but in reality the feds need to do everything in their power to ensure that this does not happen. It would truly be catastrophic.

Good article, David. I continue to post all your updates on Twitter. Keep up the good work!

The Nazi Party is alive and well in the Democrat Social;sit Party

Why do US jews hate Trump and Republicans, why do Dems telegraph their hatred to their base and their base keeps re-electing them….

Because evil has blinded and darkened their minds. Its a mental illness.

I think the entire purpose of this is to tip Michigan to the Dems:

I hope he fails miserably. What a cretin.

I think he will fail miserably this year, because people are so pissed on both sides of the political spectrum that few will be inclined to “waste” their vote this year.

Or, as an alternative, there may be so many pissed Dem voters that many may actually vote for an Amash… they may be the ones who are so brain-dead that they won’t vote GOP or Trump under any circumstances, but might end their slavish support of whoever bleep hole the Dems foist on America. Since they are in no way deep thinkers and are quite lazy, more than likely they’ll just stay home.

Libertarians are always a non-factor. Plus, they sometimes take more votes away from the Democrat than the Republican. The Libertarian party in America is a pathetic joke.

You are correct again:

My response absolutely will not post. Agreed about the Libertarian party, its worse here in BC.

Try modifying it in various ways. I have no clue what the filter is looking for, but sometimes this works.

In order for the (maybe – maybe not – see Bloomberg) term-limited mayor and his policies to be defeated in 2021, a real Republican with the stature of a Giuliani will have to emerge and be greatly supported by Trump and the NY GOP, or some hack borough president or lefty Dem NYC congressman will win to carry on the destruction of NYC.

At this point, I wouldn’t be surprised if the now released and ‘rehabbed’ image of Wiener was able to get him elected as mayor.

Remember the jerks in DC elected the disgraced mayor of DC, Marion Barry to the council AFTER he was removed from the mayor’s position, so it can actually happen.

Any Jewish person who votes for ANY Democrat anywhere is signing up for their ultimate demise and will create a real need for a Holocaust Museum in NYC and not in DC.

I was living in the D.C. area when Barry was re-elected after what he had done. At that point I knew it was completely hopeless.

I think you are correct in your speculation that we may see a similar renaissance with Weiner.

At least the newspaper headline writers will have some amusement.

Tyrants just love times like these. I wonder if NYC citizens will now wake up and see him for what he is and vote him out. I also wonder how many of NYC’s police officers are really going to enforce his dictates.

As indicated above by D3FIANT, almost certainly not. However, DeBlasio is not running for reelection.

The Left will just love him even more…and NYC Jews will help reelect him, too. You can’t make it up…

That is what I have never been able to understand. How do liberal Jewish people vote for Democrats, after seeing that they support policies and groups dedicated to their destruction?

For that matter, how do gays vote for Democrats, after seeing how they support groups that want to behead them and throw them from the roofs of buildings?

And how do Asian-Americans support Democrats, after seeing how they are completely antithetical to the hard work and family values that they espouse?

Hard times are the most revealing. Many of our leftist political figures are clearly revealing their inner impulses, and it is ugly. What was old is new again.

DeBlasio, Whitmer, and others are remanifestations of an evil that never dies.

Yep. History Always repeats itself – especially if we don’t learn from it.