Someone asked me overnight why I didn’t write something about the Land O’ Lakes label, and all I could think of was why in the world would I write about that?

For those who are unaware, on Friday, management at Land O’ Lakes responded to pressure from Native American activists and removed the image of an Indian woman from its labels after using it for more than 100 years. 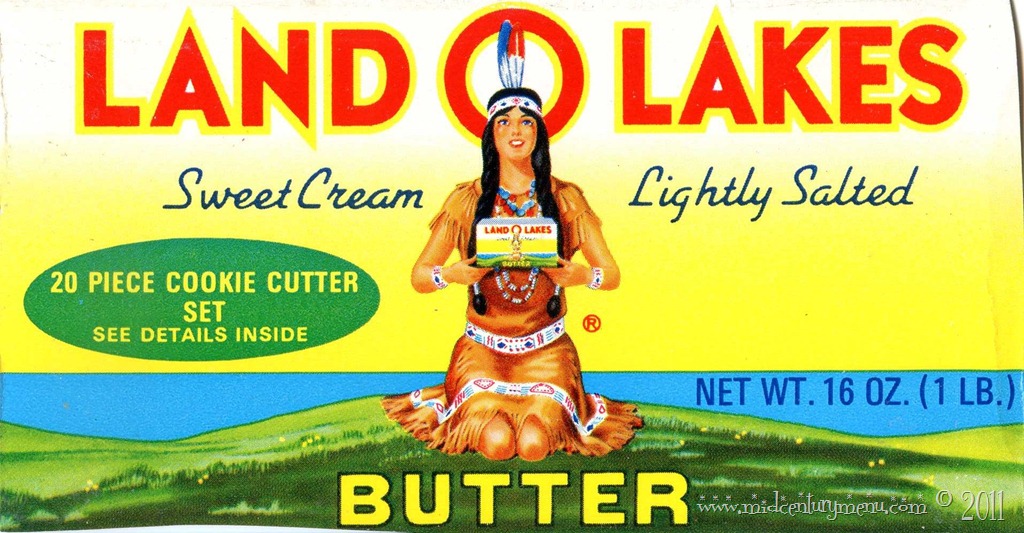 In a statement, a spokesman said it would now focus on the farmers that actually own the company:

“As Land O’Lakes looks toward our 100th anniversary, we’ve recognized we need packaging that reflects the foundation and heart of our company culture — and nothing does that better than our farmer-owners whose milk is used to produce Land O’Lakes’ dairy products,” Beth Ford, Land O’Lakes president and CEO, said in a statement.

“As a farmer-owned co-op, we strongly feel the need to better connect the men and women who grow our food with those who consume it,” she added.

Well, apparently a lot of people care about this company decision, because Twitter erupted with both messages of support and howls of protest over it, as chronicled in an article on the kerfluffle at the International Business Times. One Twitter user even put together a funny meme on the topic, indicating that Land O’ Lakes must be only 1/1024th butter:

I thought that was amusing enough to post it on my Facebook feed, but was not interested enough in the subject to actually write about it.

I had a similar reaction to all the fake uproar from many conservatives over the fact that Barack Hussein Obama His Own Self waited for so long to endorse his former vice president, China Joe Biden. Being old enough to remember the 1980s, I thought that was all kind of silly, since Ronald Reagan also waited until George H.W. Bush, faced with a challenge from Jack Kemp, had essentially secured the nomination in 1988 before announcing his endorsement.

I figure if Obama wants to emulate Ronald Reagan on anything, it’s a welcome change.

But back to Land O’ Lakes: Why should it upset anyone that they decided to change their label? By the same token, why should it upset me or anyone else if some Native American activists basically forced the change?

Personally, I do wonder why anyone found that particular image to be offensive, since the label was designed to signify quality and purity. It was hardly similar to the obviously demeaning images long used by the Atlanta Braves and the Cleveland Indians. Those, I got.

Then again, it’s none of my business to judge what does and does not offend Native American activists. And, after years of dealing with half a dozen American Indian Tribes in my professional life and observing how they are still, in the 21st century, treated as 3rd-class citizens by the Bureau of Indian Affairs and other U.S. government agencies, I have a first-hand sense of why they might be a little sensitive on the subject.

Finally, there have just been a bunch of other, more pressing issues to write about recently, believe it or not. So now you know why I hadn’t written about the Land O’ Lakes label change. But now that I have done so, I hope everyone is happy. I always aim to please.

Land of Loons would be appropriate.

Will never buy the product again.

I was really hoping that with all the serious stuff that is going on and happening to our country at present, that all the PC BS would go away. Evidently there is about 8% (30 million) of the country who are professional protesters and chronic malcontents.

Their opinion should mean nothing; they should be mocked and ridiculed and they should be ignored. However with the media and the nimrods who dominate much of social media that is not censored, their grievances and protests are given entirely too much weight.

If you don’t like America you all are free to move elsewhere; like the old 1960s bumper sticker said: “America, Love it or Leave it. Our new wall will never be used to keep free people in – leave that to the communists…in place like Berlin.

Isn’t is distressing how anything anti-American is certainly highlighted, is almost glorified, and anything pro-American ridiculed and buried in the ‘news’ of today?

Well done, SJWs. You have accomplished what white supremacists have been trying to do for so long! People of color are now pushed out of being in advertisements, and being the star of a product. From now on it will have to be white faces front and foremost. It wasn’t like it was an insult, only in the heads of people who see racism in any and everything.

I liked the imagery. I liked the subject-matter and the old-time commercial style of the artwork. It’s why I first bought Land O’Lakes, and remained a loyal purchaser for decades. It was virtually a lone cheery image amongst a diary aisle full of visual banality. No Indian gal, no purchase.

Commercials, sitcoms, and the entire swatch of modern culture is absolutely awash in gross, vomitous noxiousness that offends me and repels me to the very core of my being. It’s become almost as ubiquitous as the air. But what gets exiled? A nice, pretty and respectable image of an Indian maiden as a butter mascot, which has graced shelves for nearly 100 years. The vile PC Nazis protest, the cowardly corporate heads surrender, and the average public uses the topic as joke fodder for a few hour on social media until the next story comes along. I wind up hating everybody. But my main takeaway is that I’m now living in a country whose culture happily distributes a mountain of daily, nauseating swill, while a bright, pleasant commercial mascot whose imagery I’ve enjoyed for years, is now deemed ‘offensive’ and exiled out into the cornfield. It boggles my mind.

So, as ‘minor’ as this seems, it’s just one of hundreds of similar scenarios that have similarly played out over recent years. I’m glad it doesn’t bother you. But for me, these things add up, and leave me with nothing but utter contempt for my own country, its culture, and the people that populate it.

This is just another shining example of the most vile and debilitating of virus to have run amok in our society for far too long. That is Political Correctness. One of it’s more odious aspects is Virtue Signalling. We really need to eradicate PC, once and for all.

Me thinks the loonies are running the show now… Its a label.

People can vote whether it was a good move or not, with their dollars. Pretty sure there are other issues today that are marginally more important… Liiiiike house arrest maybe??

With the Blue-eyed Indian Princess’ picture on the butter, the name should be changed to “Land O Liars.” And it should read: “Artificial Spread.”

Dave, is there oil on the reservations? If so, should we expect the feds to do what they’ve always done to them? (Like in the days of gold?)

Pretty decent oil production on reservations in North Dakota, Wyoming and Utah, but huge natural gas reservoirs on New Mexico/Colorado reservations and allotted lands. Tribes like the Southern Utes, Jicarilla Apache and Navajos made billions during the ’90s and ’00.