Why, in my day, we didn’t have things like schools and restaurants and food supply chains. – While “coronavirus” is a term that you and everyone you know has become intimately familiar with, to the two tired old Last Geezers Standing in the Democrat presidential field, it remains a mystery. In their spooky debate last night – which felt like a post-apocalyptic contest between two addled zombie hunters – Sleepy Creepy Uncle Quid Pro Joe referred to COVID-19 as “SARS”, while The Commie labled it “ebola.”

Biden also referred to the “H1N1” virus that killed more than 60,000 Americans on his own watch as Vice President as the “N1H1” – which showed how seriously he took it at the time – and called ebola “that thing that happened in Africa.” All in all, though, none of that and the other Biden gaffes on the night will be enough for Sanders, as the nation’s Unfrozen Caveman Senator held things together just enough to make his eventual nomination all but a certainty at this point.

Here’s the way the liberal hacks at Politico put it:

News-wise, there were two important takeaways. The first is that Biden did nothing to raise any fresh doubts about his electability. He was coherent, in control of his arguments in a way that he isn’t always, and aggressive enough against Sanders to keep the Vermont senator, who is rightfully respected as an excellent debater, on defense frequently. Sanders’ best hope was some kind of asteroid-like event that caused Biden to buckle on stage. It didn’t happen.

Yes, friends and family, Bernie Sanders, a man who looks and sounds like a cartoon character voiced by Mel Blanc and whose leftist ideas would make Vladimir Lenin blush, is now being portrayed by corrupt Democrat media toadies as “an excellent debater” as a means of propping up Quid Pro Joe in the public’s collective mind. Basically, because Biden managed to remain standing and remembered where he was for two hours, he’s the “winner” according to the Democrat/media propaganda machine.

Interestingly, despite Biden’s prior insistence that he and The Commie be seated for this debate, the format was changed at the last minute in order to make it coronavirus-compliant. The two grumpy old men stood a podiums carefully spaced 6 feet apart so they wouldn’t breathe on each other, but they couldn’t resist greeting one another with an elbow bump that was eerily reminiscent of a scene from “Grumpy Old Men.” 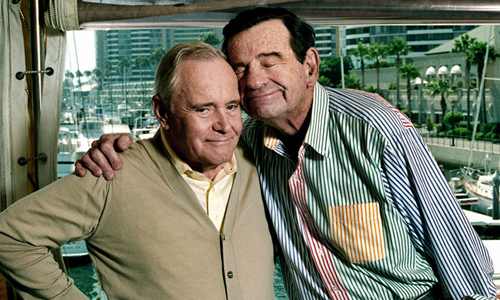 It was nice that the two could get together for one last on-stage game of political canasta before Biden wipes the floor with Sanders in tomorrow’s primaries in Florida, Arizona, Ohio and Illinois and the DNC cancels the remainder of the campaign and summarily declares Quid Pro Joe its winner. Because that’s what’s about to happen over the course of the next two days.

With governors in major population states like California, New York, Ohio and Illinois now ordering the shutdown of bars and restaurants, and the CDC issuing an advisory discouraging any gathering of more than 50 people, coronavirus is, like it or not, turning America into your basic police state and shutting down our entire economy for at least the coming few weeks. Make no mistake about it: The actions of those four governors will soon be emulated by the governors in other states as the herd mentality takes over. These are politicians after all, and none of them will want to become a media target for straying from the coronavirus stampede.

While discouraging public gatherings and encouraging people to remain shut in their homes are moves that make sense in terms of trying to contain the spread of the virus, we must also recognize that these moves will now put massive more stress on grocery stores and the nation’s food supply chains that are already finding it impossible to meet stampeding consumer demand. Restaurants provide 35-50% of the daily meals serves in this country, and limiting them to drive-thru only or delivery isn’t going to do the trick.

We will soon be seeing lines at fast-food drive-thru windows that look like the gas lines we witnessed during the oil shocks of the 1970s, and the first guy who runs out of gas – or the electric charge in his Tesla – while waiting for hours in a line will cause it to back up for miles. If you think the shelves at your local CostCo or Albertsons have been empty over the past week, just wait till you see what happens to them when everyone rushes to the store to stock up on the stuff they need to cook their hamburgers and fried chicken at home, like your mom used to do.

Governor Andrew Cuomo of New York suggested on Sunday that the President might want to “activate the army” to help in dealing with the impacts of the coronavirus. This prompted many, including myself, to joke about Cuomo’s apparent expectation that the military can just shoot or nuke the virus.

But the reality – which he did not detail for the media – is that Cuomo knows that the actions he and his fellow governors took over the weekend are very likely to cause major disruption in food supply chains, a consequence that would inevitably lead to social unrest. That’s why he wants to have the army available to him – he’s anticipating the potential need to declare martial law.

Thus, the coronavirus and the measures being taken by the state and federal governments to deal with it, are about to provide the DNC with all the justification it needs for doing what the old Clinton freak James Carville advocated four days ago: “Let’s shut this puppy down and let’s move on and worry about November. This thing is decided. There’s no reason to keep it going, not even a day longer,” he said.

Expect the puppy to be shut down come Wednesday.

Schools, most work places, and today restaurants/bars etc are closed here in MI. We have 53 confirmed cases of the virus. We did our final trip to the store for a bit to stock up on some essentials but mainly comfort food. Stuff that preppers buy on a regular basis was completely wiped out….canned food (not a can of Chef Boyardee in sight) pasta and spaghetti sauce, soups, canned meat and veggies, bagged pasta and rice gone, along with the TP and water. Rationing is already in place for staples like eggs, bread and bottled water. (People, your city water is still OK to drink!!).

Jimmy’s comments about this reminding him of a readiness exercise are interesting….it’s almost like a stress test of the entire nation. So far the calm is holding, but the veneer is pretty thin. Our restrictions are in place basically through the 1st week of April – I can see that peoples frustrations will build up over this time. If the restrictions go longer or something else happens where the screws get tightened further, there might be some trouble. I expect domestic travel is the next to get shut down.

Be prepared to hunker down if necessary. If nothing happens, all you have done is maybe buy some extra food and supplies. No harm in that.

The slimy, vile DemocRATs do not care how many people get the coronavirus and even die from it if that means Trump would not be re-elected. The DemocRATic party is the Party of hate and violence and the Party Of Mass Murder via abortion.

Next phase of the Readiness Exercise: likely Wednesday and/or Friday.

As for the run on groceries: we’d been told to stock up for emergencies for years, and most people had not – until now. it’s not panic-buying (in most cases) but a realization that emergencies are possible, and a necessary correction. People have needed to get prepared for a long time, not just the Preppers.

Its unfortunate that preppers are often labeled as oddities. Some rightly so…

But I agree that having a supply of goods on hand that would at minimum give you a couple weeks of hunkering down, is a good thing. Not just in food either… Emergencies do happen and not always to the ‘other’ guy in some other place. Seems common sense should be labeled as a super power these days because there appears to be drought in it.

They tried disarming us, and it met a stone wall in Virginia. So they found out that the American people are (mostly) not a bunch of pansies.

This whole deal reminds me (as I wrote recently) of a Readiness Exercise, to see who goes where, does what, and how they respond or react to sudden changes.

We may see more than that on Wednesday: look for larger events to take place. Mostly manipulated events. Be ready to have some Kaopectate handy. Friday may be another.

As soon as there is a 2 or 3 day “streak” of less new cases dectected, there will be a big demand to lift the restrictions imposed by these fools. I also agree with David that come Wednesday, there will be a call in the media to cancel the remaining elections. Jay.

Some things happened to some people?

We can hope that this happens to some people who have said some people?

This virus is conveniently being used to test what the globalist left salivate over… control. Create a fear then offer ‘their’ solution and people will RUN in the desired direction.

The goal is post WW2 soviet Russia control. Its been targeted at the USA because of what the US stands for, freedom and self determination. Its gonna get worse so be prepared but don’t be a panicked sheep.. This whole debacle is but a blueprint of whats to come when people forget God and don’t stand up for whats right. Look at Russia’s seventy years under this rule for an example, everyone, every aspect of what makes a country was affected. Learn from history… or repeat it…

Remember 9/11? Shorting the airlines – only those involved?
This is similar: the media, in combination with certain currency manipulators, are making a lot of money off the virus. No Wuhan virus? The mainstream media was virtually bankrupt. And by selling short, we’ll see billionaires becoming multi-billionaires, and taking from those unwise enough to sell their stocks at a low.

Manipulated event – not the virus: the use of the virus.

Dictatorship: that’s what the Left always resorts to.