Operation “Hide the Geezer” really isn’t working out well. Not well at all. – Quid Pro Joe Biden, the obviously impaired presumptive nominee of the Democrat Party, attempted to hold a virtual town hall on Friday, using some of that new-fangled high technology that he obviously believes is a lot of malarkey. Very predictably, things did not go well. Watch the clip below – I assure you there is nothing wrong with your speakers or headphones:

Joe Biden had a virtual Town Hall this evening. There was nothing virtual about the outcome. It was a literal disaster. pic.twitter.com/lZo5PVdr2T

Here’s an accurate transcript, as nearly as I can tell:

So, hey, it’s pretty much what he used to say when he held live town halls, right? Right.

But you’re no doubt thinking that things must have surely gotten better once Biden and his crack staff found a workaround to the sound problems. But you would be wrong. Things actually got really fun after Creepy Uncle Joe was provided with a fancy new I-Phone, a mysterious and strange modern piece of tech that frightens and confuses the Unfrozen Caveman Senator.

Here’s a photo of him: 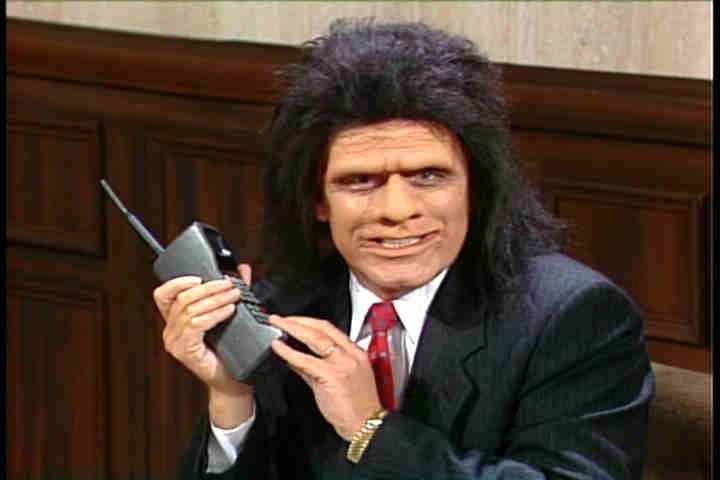 Joe Biden has no idea when he would be president:

"But even I can't do that for another two year, another year, between now and November. Or actually January." pic.twitter.com/UO1EbpElRe

The man doesn’t even know when he would take office should he actually manage to win the election. Dear God, please save us from this imbecile.

On Thursday, Biden said in a speech that he and his staff were “re-imagining” how to run their campaign without all those big “crowds” that couldn’t fill half of a high school gymnasium being present. Let’s note that the people doing that “re-imagining” are the very same people who thought it would be a peachy idea to send a guy who hasn’t figured out how to operate an 8-track tape player or his BetaMax out to try to conduct this virtual town hall.

Note to Quid Pro Joe’s staff: Any day you send this fading, corrupt buffoon out to speak without a script to be read from a teleprompter is a day filled with opportunity for disaster.

Despite all the pratfalls, Biden will almost certainly become the Democrat nominee in July. He has just one real hurdle to get over at this point. That comes in the form of tomorrow night’s debate with The Commie, Bernie Sanders.

Make no mistake about it: This is a huge challenge for Biden.

After all, this is a man whose staff has now limited him to stump speeches lasting no more than 10 minutes, 15 at the outside. In all the prior Democrat debates, with half a dozen to a dozen candidates on-stage, Biden only had to maintain some level of coherence for 10-12 minutes. In this 2-hour debate, he is going to have to speak for around an hour, without prepared notes, with no teleprompter there to keep him on script.

Which of course explains why his handlers absolutely insisted that the candidates be seated for this debate instead of standing at podiums. The less physical stress for Quid Pro Joe, the better his chances of surviving the two hours without claiming to have been the guy who brought the 10 Commandments down from the mountain top, or to have known Dred Scott personally and marched with him in Selma.

Assuming none of that or something equally disastrous happens Sunday night, Biden will sweep Tuesday’s primaries in Illinois, Ohio, Arizona and Florida and become the nominee if he can remain breathing through July. At that point, all Americans can look forward to the prospect of Quid Pro Joe and President Donald Trump holding a series of debates in the fall.

How did the democrats get to this point? They couldn’t find a 50 y.o. competent person?

When the DNC (Democrats Now Communist) had a choice between Tom Perez (and Keith Ellison, if I remember correctly?) it means that they’ve gone so far Left, they can’t see straight! No reasonable person could last 5 minutes – and so they haven’t had ONE reasonable, competent person running for President. It’s like they all live in the Land of Broken Toys. Santa can’t fix them.

The bad news is that, at this rate of precipitous decline, Slow Joe will never make it to November.

The good news is that Andrew Gillum is invigorated and ready for a new challenge.

Hilarious! He even has a “body man!”

What a pathetic senile old fool, and this is the best the DemocRATs have to offer. In a debate, Trump would chew this moron up and spit him out like a sour grape.

Dude, they are having him sit so he doesn’t wander off the set in the middle of the debate. The poor man, this isn’t funny to me anymore.

It’s sick. If the movie is funny – President Baxter Harris – the reality of VP Biden is not.

The Biden campaign has asked for Secret Service protection – and at this point, he does need protection; he also needs a male aid to help him around.

That link didn’t embed properly, but it’s ‘Razorface’ from Elton John’s ‘Madman Across the Water’ album….

Reminded me of this song–seems appropriate:

I’m not looking forward to the debate between President Trump and QuidProGropeyJoe: it would be like a debate between an adult and a 2 year old. Joe might actually win some sympathy votes (“that mean old Trump, picking on poor old Joe.”)

As I’d posted a loooong time ago, he resembles Baxter Harris in Scary Movie 3 and 4: