*Sigh*. Another staffer for The Commie talking about sending people to the guillotine. – The corrupt news media will no doubt decide there is nothing to see here and boycott all reporting on it, just as they did with last week’s video released by James O’Keefe and his folks at Project Veritas.

But Today’s Campaign Update doesn’t do news blackouts, so here is the full clip of this clown, who reveals the real nature of the Bernie Sanders support base for all to see. Since the video contains subtitles, I won’t do a transcript. Warning: It’s 2 minutes filled with profanity, because hey, he’s a Commie fan. What else would you expect?

Shortly after the staffer, whose name is Martin Weissgerber, deleted his Twitter account, but O’Keefe and others had the foresight to grab screenshots of some of his more inflammatory messages: 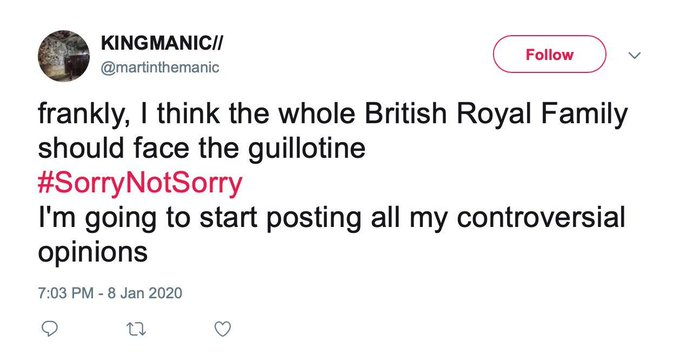 Oh, yeah, this dude is straight-up crazy. So, he’s like the perfect Bernie Sanders staffer. 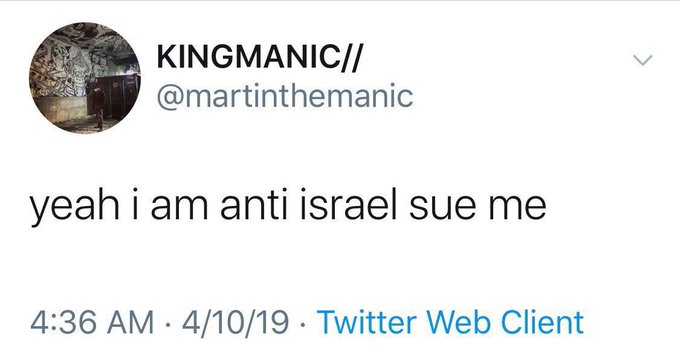 Maybe he can host his own show on MSNBC. They can call it “Deep Thoughts by Martin the Maniac.” Hey, he’s no crazier than Rachel Maddow or Lawrence O’Donell.

And besides, pretty much all leftists are anti-Israel, so this tweet just categorizes this nutjob as a standard-issue Democrat, circa 2020.

Reminder: Bernie Sanders is currently the Democrat Party’s front-runner in both Iowa and New Hampshire.

Now the sissy thug known as the “Governor of Virginia” – you know – Pink Hat Northam – and his testosterone-free loser=buddies in the Legislature are trying to push suppression of speech.

“If any person, with the intent to coerce, intimidate, or harass any person, shall use a computer or computer network to communicate obscene, vulgar, profane, lewd, lascivious, or indecent language, or make any suggestion or proposal of an obscene nature, or threaten any illegal or immoral act, he is guilty of a Class 1 misdemeanor,” the legislation reads.

“The legislation makes it clear that the above provision applies directly to “the Governor, Governor-elect, Lieutenant Governor, Lieutenant Governor-elect, Attorney General, or Attorney General-elect, a member or employee of the General Assembly, a justice of the Supreme Court of Virginia, or a judge of the Court of Appeals of Virginia,” which means this legislation effectively criminalizes dissent against public officials.”

Harrass? As in “criticize?” Eff you, Delegate Bourne. Your mother was a twerp and your father was a mollusk, and you have shat for siblings! How’s that for starters? The Governor can’t decide if Dr. Mengele (in his policies) or Walter A. Plecker, M.D. or if Kermit Gosnell are his role models! Hey, Bourne! Stuff these words up your fat arse and kiss it while you’re stuffing! Is this harassment? No, it’s a defense of our Constitution, of the 1st Amendment. A political opinion, you stupid tart! “Your mother was a hamster and your father smelt of elderberries! I fart in your general direction!” (Monty Python and the Holy Grail)

My suggestion to you is that you move to China, you sacks full of chicken shat!

The long knives are coming out to stop Bernie before he gets too much of a following. He isn’t a Democrat and he threatens the Democrat party with a change that they do not want. It is going to get better each day until November.

A vast majority of Dems do want to inflict (Weekend at) Bernie’s policies on this country; they just cringe at how open and honest he, and his supporters, are about bringing them about. The Dem leadership knows such policies (which were the same as Obama’s well hidden “hope and change” crap), if exposed, are general election landslide losers.

Where are the investigations and the preemptive actions (connect the dots/red flag) concerning the anarchists in Bernie’s communist cult? It was one of his adherents who shot up the congressional baseball practice; now this guy…

Wonder what would happen if a Trump or Cruz supporter did/said similar things?

It doesn’t cost anyone anything to leave a political party. Only 25% Identify as “liberal”; fewer than that as radicals. It makes no sense that a third of the country still identifies as Democrats – especially after witnessing three years of a real president governing as a conservative with a real backbone following eight years of the One’s policies.

The difference of Trump’s GOP and the Collectivist Democratic Party is the same as a Lincoln Town car vs. a communist (East German) Trabant. Trabant was a hideous 1960-90s enclosed lawnmower that was the Soviet Block’s answer to the West Germany’s VW Beetle. The name means satellite or companion, and made the Beetle seem like a limousine compared to the highly polluting Trabant which took over a decade to request and actually acquire.

When the left successfully foments a big revolution in the country, the battle cry will be the only good commie is a dead commie.

I just wonder why are all these lefties so angry?

Please, Dems, go with you true desires and nominate Bernie.

The Trump-Bernie debates would be epic.

He’ll have a heart attack on the debate stage; Trump would get under his skin in ways few others could, but Has-been Hillary is also kneecapping Col. Sanders, so we won’t likely see that matchup. Would be fun, though! If you like watching heart attacks.

Oh, those silly kids. O’Keefe thought he was ending Bernie’s campaign, which was a ludicrous idea unless he can produce tape of Bernie saying these things. But nobody cares, the campaign workers themselves are unaffected and still doing business as usual, working to take down America.

Col. Bernie’s going down anyway – but O’Keefe inflicted wounds like you’d find in a knife-fight. Not the kill shot, but enough to wobble the old geezer. Enough of those, and the wounds become fatal. These are a lot more than papercuts.

The New York Slimes inflicted another deep slice when it supported Lieawatha – they included her only to put an end to Col. Sanders’ Quixotic journey; their real hope is Nasty Amy, but they wanted the Col. and Lieawatha to pull each other down, like two ants trying to be the last one flushed. They (and Wall Street) fear her, but her followers are not the bat-shat crazies of Col. Sanders. Hers are angry, bored housewives and the cucks they own. Nasty Amy is QuidProGropeyJoe’s replacement. By ignoring China Mike, they also dealt a death-blow to his auto-sexual campaign. Mini Mike will be smart to leave before his China connections are completely exposed. Like the advice he gives to pregnant women who work for him: “Kill it.” Dude.

To hell with Mr Guillotine, we’ll use a rope and a tree. Mr G. is used by those frenchie french cheese eating surrender monkeys.

Dude has a man-bun – first sign of a low-T soy-boy pink hat. Simp or Incel, one or the other.

The Left has begun to eat itself: AKA soy-cannibalism. They’re human versions of Impossible Burgers.

Now that Rancid Hillary is attacking Col. Bernie Sanders – (chicken-on-a-schtick) – and Bernie bros are threatening Lieawatha, it’s time to get out the popcorn! (Use real butter.)

Trump sure had it right when he named Sanders ‘Crazy Bernie’.

That crazed soy boi isn’t going to do diddly squat. Big mouth on a mama’s boy.

So he wants to behead Bernie the rich?

Notice in the tweet that he said he “wanted to learn how to shoot.”
Instructors? Don’t take him as a student. Whadda doosh.