Tired of all this WINNING yet? – As the demented, depraved, despicable and disloyal House Democrats were advancing their impeachment scam to the Senate on Wednesday, President Donald J. Trump was doing what he does best:  WINNING for America and the American people.

About 30 minutes after San Fran Nan and her House manager clownshow pep squad held their morning press conference, President Trump hosted a set of Chinese and U.S. dignitaries at the White House signing ceremony for the Phase I trade agreement between the two countries:

As you can see, the Dow leapt up over the 29,000 level as the President was speaking, and it remained there for the rest of the day, closing at an all-time high. All other major U.S. stock indexes finished the day at record levels.

The WINNING is only going to get better today, since as I’m typing this up, Iowa Senator Joni Ernst is telling Maria Bartiromo that the Senate will pass the massive US/Mexico/Canada Agreement (USMCA) at 11:00 ET this morning. The White House plans to hold a presidential signing ceremony for that major deal early next week, when the WINNING will continue.

Meanwhile, while all that WINNING was taking place, San Fran Nan held a presser at which she announced her House Manager Clownshow Pep Squad, pictured below.

There they are in all their carnival midway glory, folks. All that’s missing is the bearded lady and wild man of Borneo, although Jabba the Nadler is a great stand-in for him.

In introducing her latest scam clown show cast, Pelosi promised that they would conduct themselves in a “solemn and prayerful” manner. She then held a celebratory signing ceremony, complete with gold-plated signing pens on which the word “United” was misspelled.

I kid you not, the Democrats are so damn divisive that they cannot even spell the word “United.”

Yet here she is, smiling for dozens of cameras at a signing ceremony, which are typically reserved for legislative celebrations and victories.

Pelosi’s behavior during this celebration was so bizarre and at odds with her public statements that even people at CNN were disturbed by it all:

Once the signing party was completed and the misspelled pens had been passed out to the assembled circus clowns, Pelosi released the House Managers to hand-carry the articles of impeachment over to the Senate, in another traditional, solemn and prayerful exercise. Here is a shot of the Managers heading over to the Senate:

As reported by The Federalist:

A new filing in the case United States v. Avenatti shows an arrest warrant has been issued for former Stormy Daniels lawyer Michael Avenatti. An image shows Avenatti being led out of the court by federal agents while he attended a hearing at the State Bar of California in Los Angeles.

Avenatti was at the State Bar of California for a disciplinary hearing for allegedly doctoring a document used to scam a client out of $840,000. Avenatti was allegedly funneling this money from his client for his personal use.

Here he is, being taken away by agents for booking: 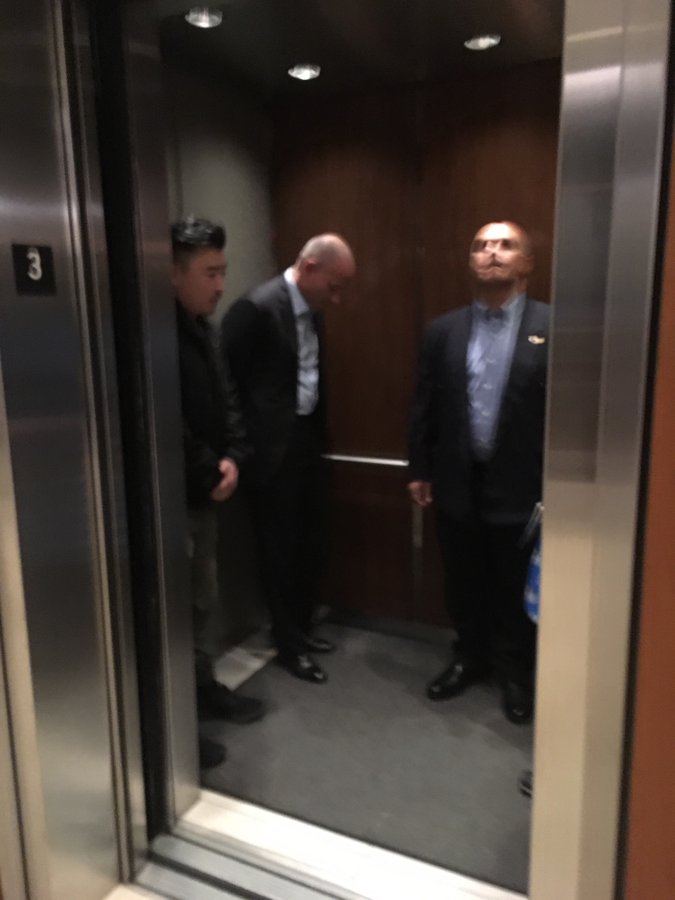 That, folks, is WINNING, BIGLY.

But wait, there’s even more WINNING! – Following Tuesday evening’s “debate” on CNN, Fauxcahontas angrily refused to shake the offered hand of The Commie after the two had had a tense back and forth over whether or not he had told her during a private meeting last year that he thought she should not run because it wasn’t possible for a woman to win the presidency.

Last night, CNN released a clip of that confrontation, complete with audio and subtitles:

BREAKING: Audio from the post-Debate confrontation between Elizabeth Warren and Bernie Sanders has been released.

WARREN: “I think you just called me a liar on National TV”

Fauxcahontas: I think you called me a liar on national TV.

Fauxcahontas: I think you called me a liar on national TV.

Fauxcahontas: Anytime. You called me a liar. You told me…

Sanders: All right. Let’s not do it now…

Steyer: I don’t want to get in the middle of it…I just want to say hi, Bernie. [What a weasel this guy is.]

First of all, who hasn’t called Elizabeth Fake Indian Warren a damn liar? This woman has publicly and shamelessly lied about every single aspect of her life, and has been caught [fake] red-handed doing it time after time after time. In this contrived controversy, if you have to take someone’s word for it, the odds really favor the Commie.

But hey, these are Democrats we’re talking about here, people who view every second of their pathetic lives through the lens of identity politics. So, let them just fight it out, because every moment Democrats spend tearing themselves apart is a moment of WINNING for America.

Winning?! Trump WIMPPED OUT — is now found out — hostilities will soon commence — GOT GOLD?
https://halturnerradioshow.com/index.php/en/news-page/news-nation/written-confirmation-deaths-injuries-from-iran-missile-attack

Below is a copy of a letter from Office of the Chief Management Officer at the Pentagon. The letter, dated January 13, reports:

Iran’s missile attack was NOT impotent.
Trump must be sh-tting his pants —

If this were true, don’t ya think the MSM would be shouting it with glee as a way to get Trump to “be sh-tting his pants -“?

The “something else coming” could be the sliding the “commie”(Bernie) outta the way again to make way for whomever. It ain’t gonna be Fauxchaontas, she’s too transparently phony. Could never hold her own against President Donald J. Trump.
If the GOP does cave in the Senate circus show, there will be absolute hell to pay. It’d be at that point that the civil war would be a real possibility. Don’t think the GOP, all varieties, want to even go there. Its a no win for them.
Just sayin’.

Funny that Lieawatha would chafe at being called a liar! She probably doesn’t even recognize when she lies, even when it’s shown to her and right in her face! (Obimbo was like that, too: he believed whatever came out of his mouth, and if an hour later he uttered something completely contradictory, he would claim that was the truth, too!) Codger Bernie shakes his fist, lies, then shakes his fist some more; Lieawatha shakes her fist, lies, then lies some more. Neither is self-aware enough to recognize this.

It’s a battle between Non Compos Mentis and Cognitive Dissonance. In the end, though, it hardly matters if it’s insanity or stupidity. They’re still liars telling lies.

I bet the Chinese are wondering why President Trump doesn’t just arrest his opponents, as they would do – and as Angry Bernie and his Commie cabal has openly stated. Quite a contrast between President Trump and the Totalitarians.

Speaking of Totalitarians: Mini Mike (China Mike) is trying to push Angry Bernie and Lieawatha out of the way with his billions. The Bernites have already planned violence if Bern-a-mite doesn’t win; see how they’ll react if someone like Mini Mike the China Doll buys the nomination! The Toties (Totalitarians) don’t care if Mini has a lot of the same beliefs. But watching Lieawatha and Angry Bernie spat is oddly…pacifying, calming. Like watching two fake dinosaurs wrestle, knowing that dinosaurs are actually extinct – and this is a battle between wannabee dinosaurs with fake teeth, uttering mews instead of roars. Safe for the kiddies!

Misspelled “unite?” Google is censoring again, search engines are making it hard to find how they actually misspelled it. A saying that was once satirically reserved for anarchists represents the modern Democrapic Party, which can’t agree on anything other than “Orange Man Bad” and “Kill the Baby:” Anarchist slogan for Dems:

Which is appropriate, since they can’t actually tie their own shoes; maybe one day they’ll reverse engineer shoe-untying.

If you add the polled support for the Commie and the fake Indian, it amounts to about a third of the total. One can conclude it is not the (empty) vessel that is appealing to the communists in the Dem. Party, but their ideology. These two dingbats realize that one or the other must quit the field for their “message” to gain nation traction. Undoubtedly they each realize that 15 – 20% won’t carry the day for advancement; one of them wants to get the whole of the commie vote which would approximately equal the same ceiling that Trump had early on in the GOP primaries in 2016: 35 – 40%.

The problem for the commies is that, unlike Trump, their 35 – 40% ceiling IS the ceiling for that ideology regardless of who is the vessel carrying its’ water, whereas Trump was able to expand his ceiling as the other Republicans dropped out.

If the status quo remains, neither Biden, Bloomberg, or Steyer will drop out as the extremely flawed Biden is the apparent “establishment” candidate, and Bloomberg and Steyer have limitless funds to keep their hope alive.

The good news is only about 25% of the country identifies as “liberal” and only about 33% identify as Democrats, so that means that 25% of 33% is the true communist “ceiling” which equates to about 8% of the country when extrapolated. This works out to about 30 million people which works out to the same amount of people whom I previously describe as the chronic malcontents.

And that number, no matter how loud, or how violent, or how much they are propped up by the MSM, they will not ever carry the day.

Personally I hope one of the two commies actually wins the nomination, which will lead to an absolute Trump landslide.

She’s way too smug. Something else is coming. I think the Lawfare crew is going to start leaking the grand jury information, and I also have a bad feeling the GOP is going to cave in the Senate.

Don’t worry, no matter which way the trial goes, Trump has the winning hand. Pelosi and Schumer have no leverage.

As Bill Murray said in the movie “Meatballs” It just doesn’t matter!”. Trump is not cowering, the foreign leaders are not shunning him and the vast majority of the GOP and his base is united as never before.

The Dems will get the big black eye(s) out of this.