This really wasn’t that hard to predict. – Yesterday, the Campaign Update told you that Nancy Pelosi had two choices in her idiotic tactic of holding onto her fake articles of impeachment: Either she would cave on the matter, or get rolled by Mitch McConnell.

The Kabuki Dance in the DC Swamp between San Fran Nan and Cocaine Mitch is about to come to its grand climax. – The only question at this point is whether the drunken Speaker with the constantly misbehaving dentures will cave in and deliver her vodka-stained articles of impeachment to the Senate, or whether the Senate Majority Leader will deem them to have been delivered and begin the Senate trial anyway…

This is a clear indication that the master of Senate procedure either has been told by the always semi-lucid Speaker that she plans to communicate the articles to the Senate no later than early next week, or that McConnell has simply had enough of his DC Swamp Kabuki Dance with her and plans to proceed regardless.

BREAKING: Nancy Pelosi announced she will transmit the articles of impeachment against President Trump next weekhttps://t.co/QDYhEudDER

From the Politico piece:

Speaker Nancy Pelosi announced she will transmit the articles of impeachment against President Donald Trump next week, ending a heated standoff with Senate Republicans over the terms of the impeachment trial.

“I have asked Judiciary Committee Chairman Jerry Nadler to be prepared to bring to the Floor next week a resolution to appoint managers and transmit articles of impeachment to the Senate,” Pelosi said in a letter to House Democrats.

She caved. Simple as that.

Folks, we have a winner! 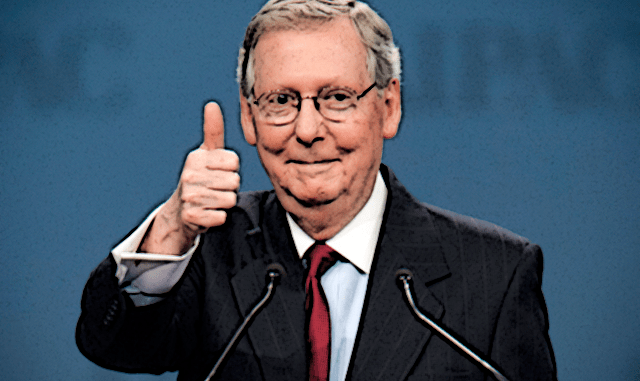 Always temper your should with a could: “this should go one way, but it could go another…”

Her hope was always on the “should,” based upon her self-delusion and wishful thinking, with the great desire to be President. As Donna Brazile wrote last year, at the same time Goatlips was planning to be sworn in aboard Air Force One:
#Madame Speaker today
#President Pelosi shortly therafter
#MLKWeekend is underway

Be ready for traps; the ambitious are always waiting to set one.

I would simply tell the Iraqi “leadership” fine, were outta here, but leave them with this thought:

In 1990 Saddam invaded Kuwait and we Kicked Your A** in like 4 weeks. Strike One.

In 2003 Saddam refused to allow proper UN and other international weapons inspectors to inspect your country for WMDs. We came back and Kicked Your A** and removed Saddam in like ten weeks. Strike Two.

Then we stupidly and generously tried to help set your country up on a pathway to prosperity and to get it to become self-sufficient, independent and join the world of civilized nations. After 17 years of “training” your “security” forces and rebuilding your infrastructure you can’t even be relied upon to protect OUR embassy. Now you want us gone; Fine, have at it. But heed this:

If we have to come back for any reason, it won’t as a benefactor, and it won’t entail putting 100,000 boots on the ground to pacify and babysit your diverse factions. It will be to absolutely OBLITERATE you, your power, and your culture. If you harbor terrorists, or allow your country to become a satellite of Iran, or any other enemy of the US, and harm comes to America through your tacit support, or neglect, Strike Three will occur…

So beware, get your act together and become a real country and join the civilized world of the 21st century.

Sorry for the repost of the above comment that was submitted on Dave’s last story; I messed up

Maxine Waters for speaker. Maxine represents the base of the Dimocratic Party.

The basest of the base!

Snub her. Dismiss the articles undelivered by Sunday. Let her take it to the Supreme Court and get denied a hearing.

Even sooner than I thought, unless she has another deceptive last-second maneuver.

I doubt it, thought. This whole strategy has been a disaster for her and may threaten her speakership.

She probably has something she’ll try to roll out early next week. It’s a safe assumption.

I’m sure she can find some brush to nibble on, when she’s put out to pasture. Baaaaahaaaaa! (goat talk for “OK, I’m done!”)