Axios is reporting that morning that new polling shows President Donald Trump gaining ground in three key battleground states as this impeachment clown show plows along. The new polls, conducted by Firehouse Strategies, show the President gaining tremendous ground vs. Quid Pro Joe Biden in the three key states of Pennsylvania, Michigan and Wisconsin, which were decisive in his 2016 victory over the Pantsuit Princess. 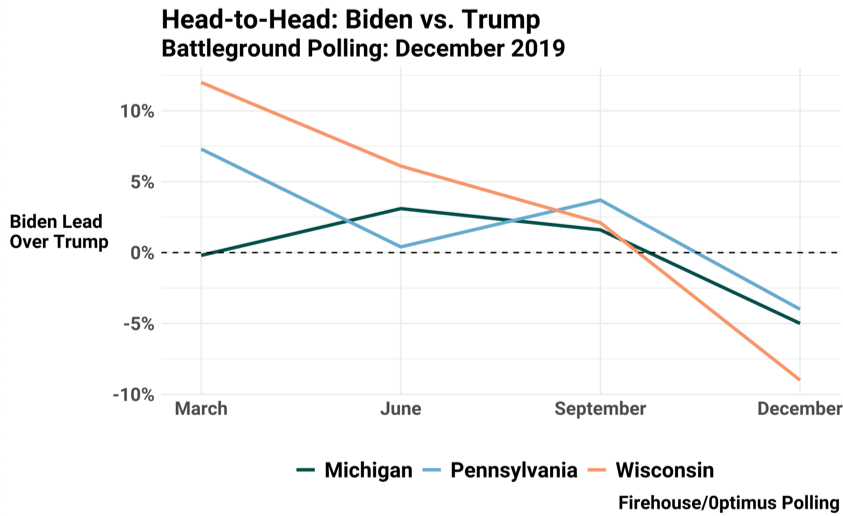 The President’s biggest gains have taken place since September, when the Democrats and their media toadies kicked off their whole Ukraine scam as a pretense for impeaching Mr. Trump. In Pennsylvania, he has moved from 7 points down in September to leading by 4 in December; in Michigan, he has moved from down 2 to leading by 5; and in Wisconsin he has gone from minus 3 to plus 9, a whopping 12 point shift in just three months.

A December 3 report by Axios, which looked at a dozen October/November polls gauging voter support for impeachment, found it opposed in 8 key battleground states by a 51-44% margin. Not a good sign for the power-mad Democrats and their corrupt media organ grinder monkeys.

I’m not generally a fan of polls – especially the national horse-race polls – because of the obvious bias in the polling industry, a bias that regularly produces polls that over-sample Democrat voters. The simple fact of the matter is that most polls taken these days are compiled in order to create news stories and generate clicks to websites, not to legitimately gauge voter attitudes. National polls are also skewed by the overwhelmingly Democrat margins in California and New York, two states that have rendered themselves completely irrelevant in presidential elections due to their single-party status.

But polls taken repeatedly over time, or multiple polls taken in aggregate can be valuable in the assessment of overarching trends, as the polls cited by these two Axios reports do. The overarching trends in the key battleground states that will ultimately decide the 2020 vote in the Electoral College – the only vote that matters – are decidedly and unarguably bad for the power-mad Democrats.

Simply put, the Democrats are destroying themselves with this impeachment farce, and that is very good news for America.

I remember a while back Trump said to add eight points to his side of the ledger to get an accurate poll. I agree; that is the probable built in bias on all polls. That would raise Trump to about 51% on the RCP average and 60% on Rasmussen. Combine those results with the nationwide bullying of Trump supporters and you can add another 5-10%. That would put Trump at or over 60% in most cases which is more logical.

B. J. Clinton’s “approval” remained in the 60+% range during his impeachment which was as bogus as Trumps current 43%. If the Clinton polls were in any way accurate, Gore would have become Clinton’s “third term” a la Bush the First in 1988 being elected by a near landslide to continue Reagan’s third term. Bush and Gore were mediocre candidates; their respective win and loss represented their predecessor’s real popularity.

Virginia is probably lost to the Dems, but if Trump reclaims the Rust Belt states, which I think he will, it won’t matter. I don’t even think Minnesota is out of the question, as crazy as that sounds.

Virginia has been lost to Dems for a long time. This latest upheaval just escalates their fall.

Don’t count Virginia out! The response to 2nd Amendment sanctuary cities shows that a lot of people are very energized, and the African American population is increasingly pro-Trump, particularly the rural areas. The Dims used to count on Tidewater for the black vote, mostly because the Va. GOP resembles a bunch of tobacco chawin’ old boys with sh-t for brains, and no way they gonna vote GOP! But this ain’t your granddaddy’s GOP, and neither is Trump.

By the way, at Appomattox historical site, there’s a quote from Robert E. Lee, saying:

“I have been up to see the Congress and they do not seem to be able to do anything except to eat peanuts and chew tobacco, while my army is starving.”

That would be the Virginia GOP: eating peanuts and chewing tobacco, indolent as always, not even able to field a decent set of candidates for the Virginia General Assembly! Until all those old farts are retired or die of indolence, it’s gonna be the same. Except in President Trump’s re-election. Trump will carry Virginia if he puts his back into it.

Sow the wind, reap the whirlwind.

Politics is violence and political government it the bane of humanity; it is not Christian. Voting is an act of violence as the voter seeks thugs to impose his opinions, views, beliefs, prejudices and false religion on those who do not share the same and all in the “land of the free.” How immoral and ironic is that?

What can come of a brokered D-Con(vention?) Like the aforementioned, previously formulated anticoagulant rat poison, they’re going to bleed. As they’re now doing before our eyes. Can’t think of a better reason to vote Conservative Republican (as opposed to the squishy Mittsy version) than Schiff and Nadler! As al-Bama was a great gun salesman, and same with Mikey Boombug, these guys are a walking endorsement of President Trump and those who support him. There will be no power in their nomination, just a sacrificial candidate – maybe HRC II, like a horror movie sequel with the nasty girl rising up from the abandoned well.

Perhaps, but do not misunderestimate the consequences of the increased voter fraud that is inevitable.

They’ve pretty much maxed that out, and they’re not going to be able to compensate for hemorrhaging the black male vote.