Just a reminder: Do not put any hopes on Michael Horowitz doing anything to help bring the Coup Cabal to justice. – As we have repeatedly pointed out, Mr. Horowitz’s job is to investigate and provide cover for the bureaucracy that pays his salary. His internal role at DOJ is to “investigate” alleged wrongdoing among its employees and then to provide rationale arguing why that wrongdoing was nothing more than violations of internal policies, a simple lack of candor, innocent mishandling of documents, etc.

He might make the occasional criminal referrals targeting low-level functionaries – the Peter Strzoks and Lisa Pages of the world – but if you’re waiting for him to do the same where Jim Comey or Rod Rosenstein or Sally Yates are concerned, you are going to be highly disappointed when his long-awaited report on FISA abuse is released next week. So don’t hold your breath anticipating any real effort to bring the real bad actors in all of this to anything resembling justice coming from a career apparatchik like Horowitz.

In fact, the media supporters of the coup cabal have been working overtime this week to prop up Horowitz and mask the reality that his latest report is going to be just another basic white-washing of rampant DOJ corruption during the Obama years. A great example of this coordinated effort between the DOJ butt-coverers and their media supporters came recently from the New York Times, who else?:

Justice Department Inspector General Michael Horowitz put together a chart of all the mistakes he found the FBI made in the process of obtaining warrants to wiretap former Trump campaign adviser Carter Page.

The list of “numerous” errors and omissions appears in a draft report containing the findings of Horowitz’s year-and-a-half investigation examining the DOJ’s and the FBI’s compliance with legal requirements and policies in applications filed to the Foreign Intelligence Surveillance Court, according to the New York Times.

See, in the world of Michael Horowitz, even the most egregious abuse of the process or leaking of classified material or defrauding of the FISA courts is just a “mistake,” an “error” or an innocent “omission,” all to be explained away as quietly as possible in order to protect and preserve the institution. Why, he’s even going to provide a nifty chart to illustrate it for all of you visual learners out there. The bad actors might or might not be fired as punishment, and the occasional miscreant like Andrew McCabe might be stripped of his pension as a response to findings in one of these reports, but if you’re expecting Horowitz to provide any sort of justice in any real sense of that word, you are barking up the wrong tree.

As if to illustrate that point, the DOJ itself joined in the effort to prepare the public for this non-event report by issuing this public statement: 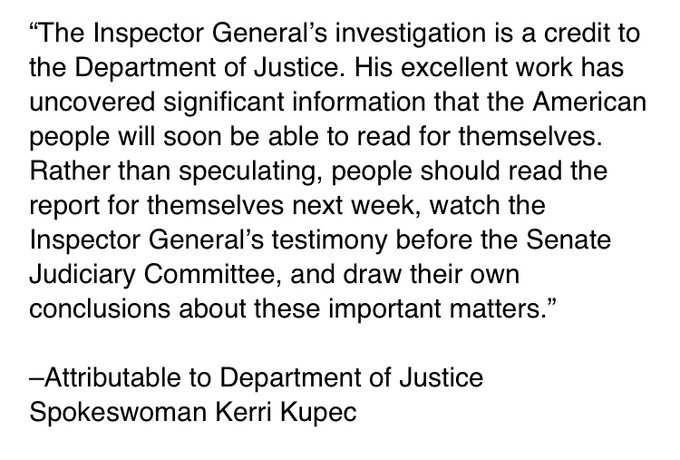 “Be wary of the Washington Post and the New York Times reporting on what is coming up with Horowitz. They have been trying overtime to spin this thing to diminish its effect, to downplay it,” the South Carolina Republican said.

“I can tell you without any hesitation Attorney General Barr has every confidence in the world in Mr. Horowitz,” Graham added. “He believes that he has done a good job, a professional job, and he appreciates the work and the effort he has put into disclosing abuse at the Department of Justice.”

So basically, the message from the DOJ spokesperson du jour and Sen. Graham is to ignore all the media propoganda floating around, read the massive report for yourself (like that’s ever going to happen with 99% of the American public) and make your own judgments.

And then what? Graham says he plans to ask pointed questions of Horowitz when he appears before the Senate Judiciary Committee on December 11, two days after the report is made fully public. Oh, golly, Lindsey, do tell! Do you also plan to point your finger at him and say “tsk-tsk, tut-tut?”

Um, and then what? Is Graham or anyone else in the U.S. Senate going to do anything to demand any real justice? Not really, because they don’t have any power to do so, and probably no intention, either. They can write letters and do their own criminal referrals on the Comeys and Strzoks and McCabes and Pages and Bakers and all the other Cabal players, but as we have repeatedly seen, the professional snakes embeded at DOJ just toss them into the trash can and play the waiting game.

But what about William Barr and John Durham? What about their investigation? Well, as we’ve repeatedly noted, they are your only remaining hope of any real justice ever coming about on any of this. But here’s the deal: William Barr might only have another 12 months at DOJ. If the 2020 election goes the wrong way, he will be out of a job faster than Rod Rosenstein can sign off on a fraudulent FISA application.

Meanwhile, the Michael Horowitz’s of the world go on, remaining embeded within their safe, tidy, butt-covering jobs at the DOJ for as long as they want to hold them. William  Barr is a political appointee who serves at the pleasure of the President; Horowitz is a lifetime apparatchik who serves at his own pleasure and whose lone true function is the preservation of the institution that makes that possible.

For those few who do take the time to read it, Horowitz’s report will no doubt contain a huge amount of very damning information about the real bad actors in the whole “Russia Collusion” fantasy play. But unless Barr and Durham decide to act on that information, it will all be long forgotten just a few months from now.

Trump’s first term is being well spent exposing the entire fraud of Washington DC and the MSM/Social Media.

His second term needs to be spent punishing the entire fraud of Washington, DC and the MSM/Social Media.

It is ultimately up to the American people to vote for Trump and a real supporting cast of politicians (no Democrats, no RINOS) in 2020. The old saying that we ultimately get the government we deserve has never been more true.

It is up the voters to decide whether the swamp-dwellers will be rewarded and their order preserved, or be punished and destroyed. If the swamp is defeated, the republic, as founded, shall be saved and preserved. Trump’s second term, with real political support, offers the only chance to reset the course of America; either Constitutional Republic following the rule of law, or a Banana Republic with misery for all except for the Dictators of the Swamp.

It really is that simple.

This report is going to be devastating and indictments are happening , BIG TIME .

I agree. It all begins with the corrupted FISA warrants, and spreads out almost exponentially. And one thing people need to keep in mind – if they read the link you provided: once feds prosecute, they almost always win convictions. In some cases, like one of Mueller’s nasties, they win by cheating. No need this time: evidence, evidence, evidence – and a whole lot of people scrambling to turn state’s evidence.

On the political side, as Dave and others suggest, little will be done. Until people like Schiff come under investigation for their personal behavior, which is rumored to be…well, let’s just say that these are only rumors at the moment. The pendulum is swinging, as in the Pit and the Pendulum, and Schiff is tied to his own device..

Graham is a pansy. Horowitz is an FBI mob henchman.

So how long will we have to wait for Durham or Barr to present their B.S. If they ever want me to follow the laws they better make sure the big wigs do. I am tired of this sh**.

I agree with you, David. I’m usually the eternal optimist, but after the last 3 years & previously the Hillary Clinton fiasco, I don’t believe any serious charges will be brought against anyone except a couple of low level file clerks.

Sad but true. We the people will will never get justice and the deep state will just be emboldened.

Whatever you think of him–deep state tool or constrained public servant–the Horowitz report was always going to be long on process and short on substance. If, as I believe, Barr is bringing the hammer down, it isn’t going to matter.

One beneficial service of Horowitz, as you point out, is the further exposure of Sir Tick-Tock and his nightly parade of phonies. How does this guy get any ratings at all–who is watching?

Dave, read this and don’t get your shorts in such a bundle Barr is a law and order guy:

Barr is hinting: Declass is coming. Guess who has the power to release that? William Barr; the President gave him that authority. There will be a dark chasm between Horowitz’s work and the FISA fakes (predicates for the investigation) that Barr most certainly will release.

There will be pain. See the WAPO run! See the NY Times scream in terror. It’s gonna be like watching the 2016 election on most of the networks election night.

Relax Dave. Barr has stated that he disagrees with the FBI did nothing wrong. Also, Barr and Durham have evidence from sources not available to Horowitz. That evidentiary road is a on way street from Horowitz to Durham. Also Horowitz is ethically and legally bound to uphold the presumption of innocence for everyone involved. Meaning he does not declare in the report that someone is guilty, he simply makes criminal referrals. So stop stomping your feet like a ,3 year old and realize Barr doesn’t work on your time schedule.

The DOJ IG completed two investigations related to the 2016 elections and they were a whitewash of monumental proportions. The only difference I expect to see in his FISA report, is that the word monumental will become MONUMENTAL. Horowitz is part of the swamp and the IG position was created to cover up wrongdoing while keeping public anger in check. Frankly I was really pissed off when he glossed over the Hillary email investigation.

Horowitz is still completing the draft of the investigation on the Tea Pot Dome Scandal in the 1920s. The hold up on that report is he can’t find any of the participants (alive) to get input on his findings.

So between the Horowitz wet blanket and the upcoming Durham report, it all comes down to Barr. Supposedly Durham’s investigation is now a criminal one, but no one has heard anything on that front for a couple of weeks. A criminal investigation should yield some criminal referrals, but Barr has to indict. Will he do that? Especially if its someone with a lot of political capital in DC? Does he want to be the center of the universe for all of the flak that will come his way accusing him and Trump of abusing power against political adversaries? That’s the way it will be framed on TV.

My guess is a few low level people will get thrown under the bus, the Dems and the MSM will still go into hysterics and then everyone will move on, and justice will not prevail.