Ok, so, what else would we expect from the New York Times, right? Right. Still, the headline that ran with an op/ed piece by the corrupt newspaper’s inept economist, Paul Krugman, betrayed a desperate effort to plumb new depths of journalistic malfeasance by the newspaper of fake record: 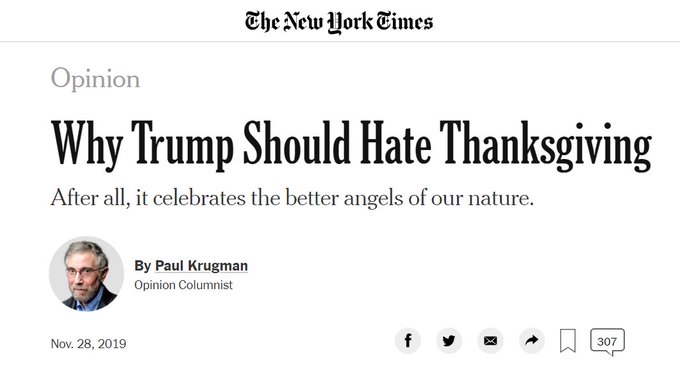 I couldn’t tell you what Krugman says in his latest bit of lame-brainery because it’s behind the Times’s firewall, and we here at Today’s Campaign Update are not in the habit of lending monetary support to the faking of America’s news. But let’s be honest: Nothing Krugman has to say is worth noting anyway. After all, he’s the circus clown who predicted that the election of Donald Trump to the presidency would bring about the total collapse of the U.S. economy, a collapse from which America would “never recover.”

It’s fair to note that Krugman and the Times were not the only corrupt fake journalist/fake news outlet to disgrace themselves on Thanksgiving. Jessica Kwong, a fake reporter for the on-life-support Newsweek – which no longer can afford to exist as a real magazine but still fakes the news in the digital space – issued a tweet early on Thanksgiving that said: 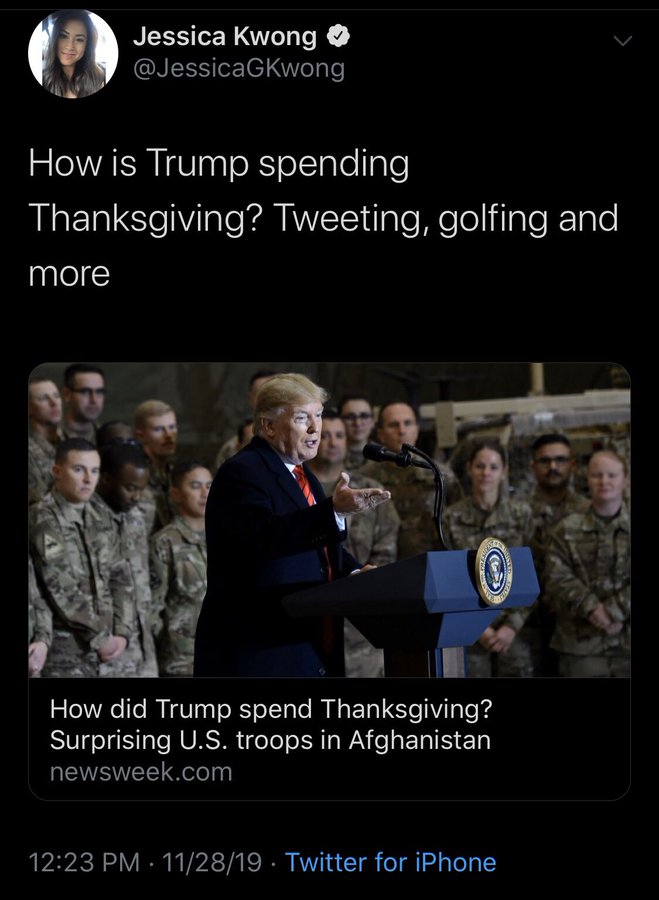 But later in the day, news broke that President Trump had in fact flown out to Afghanistan in the wee hours of the morning to make a surprise visit and spend Thanksgiving with U.S. military personnel at Bagram Air Field. There he not only dined with the troops, he actually served them their dinner, laughed and joked with them and just generally enjoyed a rare chance to be with real Americans and the troops he loves and supports:

President Trump in Afghanistan for surprise Thanksgiving visit to US troops. The President left his Mar-a-Lago home in secret & flew overnight to visit US troops for an unannounced holiday visit. pic.twitter.com/QFZfyWNte2

Trump headed to Afghanistan to surprise U.S. troops on Thanksgiving https://t.co/f7Xeqz1ZGQ Deleting this tweet because it was written before knowing about the president’s surprise visit to Afghanistan-an honest mistake. Story has already been updated, as shown in the screenshot. pic.twitter.com/g9CfPaV2kQ

An “honest mistake.” Yeah, sure, right, uh-huh. That’s an interesting way to describe going to press with a completely false story with zero sourcing or journalistic process in just another corrupt effort to do harm to the President’s reputation. In today’s 100% dishonest, corrupt media, there is no such thing as an “honest mistake.”

Kwong’s humiliation led to the creation of this sterling Twitter meme:

To be honest, I don’t remember a time during my 60+ years on earth when Newsweek was a reputable news source, but I suppose it might have been the case before I was born. In any event, it and the New York Times have certainly surrendered all pretense over the last four years.

Kwong has been canned.

Amb Sondland: “That was my presumption” about President Trump

NewsWeek: “That was our presumption” about President Trump

Nobel Prizes in general are leftist political playthings and have been right from the get-go, established to absolve the guilt of explosive munitions magnate and TNT inventor Alfred Nobel.

Hitler was allegedly nominated as a joke, just before the war, according to some sources. Some joke.

I have told Krugman what I thought of his intelligence level on his twitter page several times. I question him regarding his economic forecasts after the election. I still cannot figure out how he won a Nobel! The Idiot still hasn’t banned me. I can’t stand people like him and I consider them traitors to our Nation.

The “Nobel” (Peace? Prize) is nothing more than leftist hack’s participation trophies. All anyone has to do is look at who the political winners are (Obama in less than a month after becoming president – he got it on the come for doing nothing), Woodrow Wilson, 1919; Yasser Arafat, 1991; Carter, 2002, along with other leftist, quasi terrorists, and ineffectual radical, anti-American, or fraudulent organizations. Occasionally they get it right and give it to the Red Cross, Mother Teresa, and Lech Walesa, More importantly, to get a true perspective of the criteria for getting an award, the following notable peace achiever has not received the award: Ronald Reagan, who won the cold war, stopped the expansion of communion, and brought peace, freedom, and prosperity to millions of Eastern Europeans WITH OUT FIRING A SHOT!. Meanwhile, I’ve heard reported the Obama was the ONLY president in US history to have had American troops engaged in foreign conflicts during EVERY SINGLE DAY of his eight years.

So, if I was a successful conservative leader, the Nobel Peace Prize is the LAST award I would want bestowed upon me.

Just like everything the left touches, they ruin the spirit, intent, and meaning of anything positive or good.

I’ve always said that I would sue for libel if they gave me the same award they gave al-Bama and Arafat.

The only good thing the fake news did was confuse our enemies. When Newsweak tweeted what they thought the President was doing on Thanksgiving, the enemy would have no idea the President was really going to see my brothers/sisters in arms. So not only did they help keep this secret, they made themselves look bad at the same time. A double win for PRESIDENT DONALD J TRUMP!!!

I’m beginning to think she was fired because her story may have protected POTUS, not because she was an ill-informed hack (which may be true, unless she was a paid dis-informant helping keep POTUS safe.)

So you are right, by the Grace of G0D – one way or another.

Newsweek sold for $1 back in 2010. Back in the age of the dominant MSM it was always the weak sister to Time.

It’s current digital form is just a rancid habitat for loser hacks writing out of their mom’s basement.

That said, the fake news was outraged by Trump visiting Afghanistan, most especially by the fact it it heralded the reopening of negotiations with the Taliban. Trump will have us out of Afghanistan, Syria, and Iraq fairly shortly, probably in advance of the 2020 election.

Did anyone really expect any leftist rag to publish anything positive about President Donald J. Trump? Really?
I was not disappointed at all by the fantasy writer for the “Newsweak”. Just another hack pretending to be a reporter/journalist.
And she was so Kwong. lol. Bad joke, I know. But she, and all the rest of the fake news crowd needs to expect blowback on their false narratives published as truth. Usually as far from truth as can possibly be.
Loved seeing the POTUS visiting the troops and hanging with ’em. Filled up my heart to overflowing with pride that he, Donald J. Trump is my President. Winnnin, winning, winning.
KAG 2020.
Just sayin’.

“I thought Newsweek was out of business?”

My take on this; cue the Twilight Zone intro:

“Imagine a universe where the media has become insane, and cannot report straight news, and the reporters, journalists and editors are using powerful hallucinogens; imagine a Deep State government which does all it can to sabotage the economy, jobs and the overall well-being of the American People, and Intelligence and Law Enforcement and the Justice Department have all conspired to prevent a President from being elected, taking office and continuing to serve, and the House of Representatives have manufactured hearings to unseat the President. You have just entered…the Twilight Zone.”

Newsweek what? Never heard of it.