Our fake news media’s love affair with Islamic terrorists never dims, nor does its knee-jerking to take every possible shot at President Donald Trump, no matter how absurd it might be. –  The Washington Post got things started in the immediate wake of the announcement of the U.S. military’s killing of the mass murdering ISIS “leader” with the most sympathetic headline it could muster to describe him: “Abu Bakr al-Baghdadi, austere religious scholar at helm of Islamic State, dies at 48.”

Oh, see, the guy who ordered his forces to film the chopping off of innocent victims’ heads and posting them on the Internet wasn’t a terrorist, oh no. Why, he was just an “austere religious scholar” in the minds of the American news media. After the Post began collecting flak from outraged readers, its depraved editors made the decision to “correct” the headline: 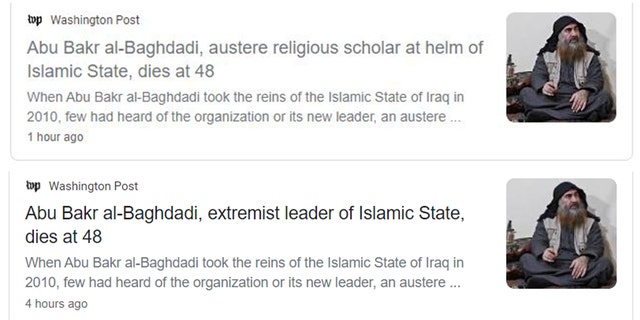 So, he’s still not a “terrorist,” but now at least he’s an “extremist leader.” The Washington Post has a rule against using the words “Islamic terrorist” still to this day. Holy crap.

Not to be outdone, Bloomberg followed the WaPo example with this little bit of despicable nonsense:

So, in the minds of the folks at Bloomberg, al-Baghdadi was just a poor boy who made good, and his terrorist organization that mass-murdered tens of thousands and displaced millions suddenly morphs into an “entity” that “covered swaths” of the two countries that it in fact raped and pillaged. You seriously could never make these fake journalists up.

Oh, hey, but what about the New York Times? Surely, the terrorist-sympathizing slugs on the Times staff could never allow themselves to take second chair to the WaPo when it comes sucking up to ISIS, right?

Here is the tweet the Times sent out summarizing its lead story on the success of the U.S. military operation: 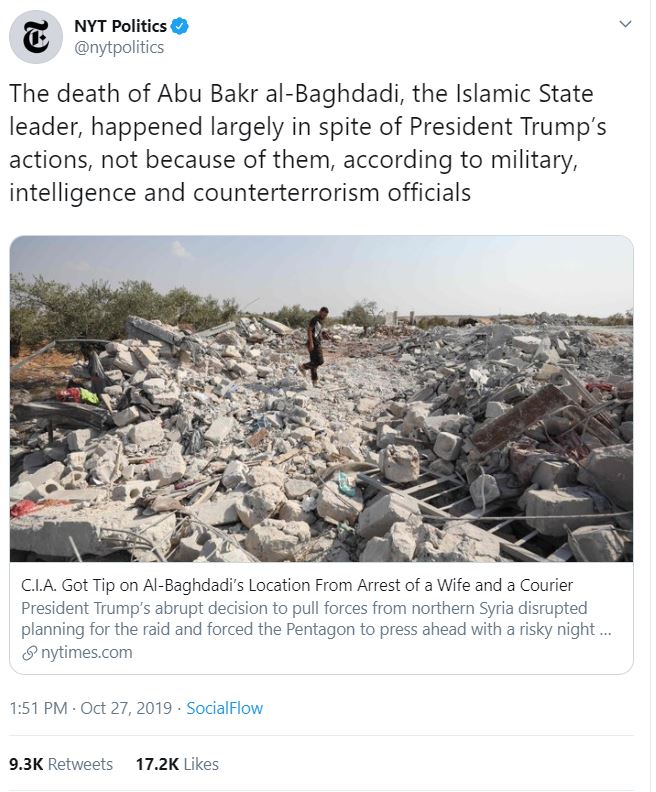 In its story, the Times pretends to have “multiple sources” for its obviously false narrative which is not supported by anyone with any knowledge, but fails to identify a single one of them. Just one more in a very, very long line of fake news stories published by the Times to make its rabidly anti-Trump reader base feel better about another in a very, very long line of Trump wins.

Finally, we come to the hacks at Politico, who really and truly wrote this after the President was booed at last night’s World Series game between the Washington Nationals and the Houston Astros:

IT’S A SIGN OF THE PRESIDENT’S ISOLATION, too, that he took only his staunchest Republican allies with him to the game, along with the first lady. Nats Park is perhaps one of the only gathering places in town that draws Republicans and Democrats in equal measure — but his box was all red.

THAT SAID … He was under no obligation to notify Speaker NANCY PELOSI ahead of the Baghdadi raid, but telling her and other top Democrats would’ve bought a huge chunk of goodwill. Pelosi — a former top Democrat on the House Intelligence Committee — has been trusted with state secrets for decades. There is approximately zero chance she would’ve dialed up a reporter to leak the plans.

What a load of abject horse manure. First of all, Washington, DC is about 90% Democrat, as clearly demonstrated in the 2016 election results. Thus, the crowd at that game – which the Astros, a team from the very Red state of Texas, thankfully won – was most likely overwhelmingly Blue. Given the sorry behavior of Democrats in this day and time, it was easily predictable that they would boo President Trump, who they all hate with a demonic passion.

Second, the thought that pre-briefing San Fran Nan, Adam Schiff and other congressional Democrats would have “bought a huge chunk of good will” is so transparently absurd that it is hard to believe that even a fake news hack from Politico would actually write it.

What, are we to believe that Adam Schiff would have been so moved by a pre-briefing on a military raid that would suddenly develop a sense of ethics and love of country? Are we to really think that San Fran Nan would have responded by calling off the whole Soviet-style impeachment operation? Did the writer of this piece just escape from his baby crib? A mental ward?

Every patriotic American is today celebrating the U.S. military operation that killed one of the most despicable mass murderers in world history. Is it any surprise to any of you patriotic Americans that the Democrats and their toadies who infest your national news media are not joining you in doing so?

I only hope that all of the despicable anti-American and anti-Trump actors in this disgraceful episode of American history are held accountable before they escape to New Zealand, or to places where we don’t have extradition agreements, including all of the corrupt actors in the media – especially the government/CIA/DOJ/FBI/Congressional imbeds.

Knowing how the demoncraps operate their “leakers” would have tipped off abu baker al and his cohorts. If notified a day before adam shi** and the nancy would have flown there and warned him personally. At least that is what you could safely assume through their past behavior.

The depravity of the corrupt media is breathtakingl!

Not only is D.C. 90% or more Democrat, Northern Virginia (where many of these disgraceful fans live) is overwhelmingly blue as well. Americans used to know that certain actions, such as booing the American president at a public event like a ballgame, were wholly inappropriate and unacceptable behaviors. It also used to come together at the defeat of a common enemy overseas. The Left has rejected all norms and standards in its myopic and crazed anti-Trump obsession.

Pelosi would have been on the phone to Schiff, who would have then been leaking this top-secret information to the media, in approximately 2 nanoseconds. Many military personnel may have been killed, but that would be fine with the Times and CNN, as long as it politically damages Trump. These people truly are, in Trump’s word, ‘human scum’.

My Son took a job in DC a few years ago. He votes Republican and always has. His daughters were bullied in school in an extreme manner, simply because their parents are Trump supporters. It is a serious issue that shouldn’t be happening.

Yeah, they would have smeared the blood of Service personnel all over Trump as long as it served their purposes. Hard to calculate that level of evil.

Media/Dim response should once and for all prove beyond a reasonable doubt to any lucid observer they hate this country and it’s founding principles as much as they hate/despise ANYONE who is not in their “progressive tribe”.

Schiff only grudgingly expressed support for the raid because he’s a slimy worm who is aware that big birds eat small worms. Princess Pelosi and the press and others are like children dancing on the edge of a tiger’s cage. (Ooops! another one fell in! Pity.)