As Attorney General William Barr and U.S. Attorney John Durham’s investigation shifts to a criminal prosecution, the bad actors continue the fight. –  You may or may not remember the curious case of former Overstock.com CEO Patrick Byrne, which was reported in the Campaign Update on August 23, after Byrne had made explosive allegations against the Coup Cabal during an appearance on Fox News.

If you don’t remember it, here’s the clip of that interview, the transcript for which can be found at this link.:

Byrne makes several allegations in that interview, but the chief one to focus on today was his contention that, due to his having worked with the FBI on a case about 15 years ago, he was asked in late 2015 to engage with a Russian agent named Maria Butina (pictured below) and introduce her around to several presidential candidates, including Marco Rubio, Ted Cruz and yes, Donald J. Trump. Those three just happened at the time to be the three leading contenders for the 2016 GOP nomination. 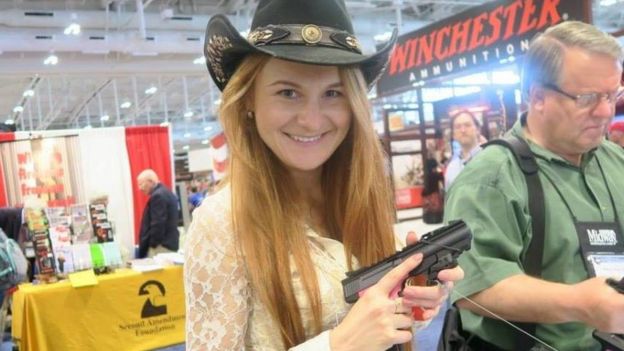 Odd, right? Well, not really, given what we know today.

Byrne ultimately came to realize that the purpose of this operation was to “dirty up” these candidates by associating them with a Russian agent, giving James Comey’s FBI a pretext for initiating surveillance on their respective campaigns. Byrne claimed that, when he confronted his FBI handlers about his suspicions, they confirmed that was indeed their intent.

Ms. Butina ultimately became ensnared in the Mueller investigation, pleading guilty to conspiracy charges ostensibly related to her interactions with NRA officials during 2016. She received an 18-month sentence and was sent to a maximum security prison in order to prevent her from having any access to the outside world, i.e., to keep her quiet. She was moved to a minimum security prison in May, a decision Byrne claims was made by AG William Barr after a meeting with Byrne.

Why are we going through all of this again today? Because on Friday, one day after we learned that the Barr/Durham effort is now a criminal investigation, Ms. Butina was suddenly released from federal prison several weeks before her sentence had run out, and immediately loaded on a plane and shipped back to Russia on the orders of federal officials.

At the very end of the Reuters report linked above, we find this semi-explanation for Butina’s sudden release and deportation:

Asked whether Washington now expects Russia to release a former U.S. Marine named Paul Whelan currently being held on accusations of espionage, a State Department spokesperson said, “We continue to urge the Russian government to ensure a fair trial, including a fair and public hearing without undue delay, in accordance with its international legal obligations.”

A Russian court on Thursday ordered Whelan, detained in 2018, held in custody until Dec. 29.

So, thanks to the machinations of the bad actors who remain embeded within the Trump Administration, we can fully expect Ms. Butina to now disappear forever, perhaps to the wilds of Siberia, never to be heard from again. And Mr. Byrne’s story will be disappeared along with her.

Speaking of bad actors continuing the fight… – Also on Friday, Obama appointed federal judge Beryl Howell ruled that the Department of Justice must grant access to some of the federal grand jury material withheld from the Mueller Report to Jabba the Nadler and the members of the House Judiciary Committee. The material has thus far been withheld under very clear U.S. law and legal precedent in order to prevent it from being leaked into the public domain, which we know Nadler and his fellow Democrats will do as soon as they get their grubby hands on it.

Such grand jury material is traditionally withheld in order to prevent innocent citizens who testified before grand juries from having their reputations smeared as a result of doing so. There has been a non-partisan consensus for more than two centuries in this countries that making such testimony public will have a chilling effect on the ability of future grand juries to compel witness testimony in their efforts to get to the truth.

But this is an Obama judge, and she couldn’t care less about pesky things like precedent, tradition or truth. The decision will no doubt be appealed, and hopefully the appellate court will smack her down.

Anyone think Barr, after he began stepping into his role, felt like he stepped into a great big steaming pile, and said “Oh, my Lord! How deep does this muck go?” He’s about the only one who has shoes for it.

So far so good. Pray for him, for his safety and his success.

Boris Badenov will be waiting at the airport to keep Maria safe from the diabolical Putin-Nazis *gasp* and she will proceed to urinate on the floor in the room where the immaculate Imam Hussein Hopenchange once rested.

She obviously was not held in prison in a sanctuary city or they would never have been able to deport her.

She’s lucky they deprted her…but she shouldn’t sleep alone…she’s bound to come down with a bad case of Arkancide!

If the appeal goes to the DC Circuit, it will indeed be slapped down.

Still many Obama holdovers at the district court level doing their worst, but the Circuit courts have been transformed thanks to Trump and Cocaine Mitch.