What is it with leftist politicians and this blackface thing? – Was it just a really big deal among white lefties in the 1980s and 1990s to do blackface parties? Asking because, having never been a lefty, I would have never been invited to their shindigs (all you Millennials and Gen-Zers will have to google that reference).

Anyways, leftist Canadian Prime Minister Justin Trudeau has now achieved the Ralph Northam and Hillary Clinton badge of honor, as a photo of him in full blackface (the fawning Canadian press is calling it “brownface” as if that makes it all better) at a party that supposedly took place in 2001 has gone public. Oh, and check out the placement of his hand, also painted black – it’s like he’s channeling Joe Biden: 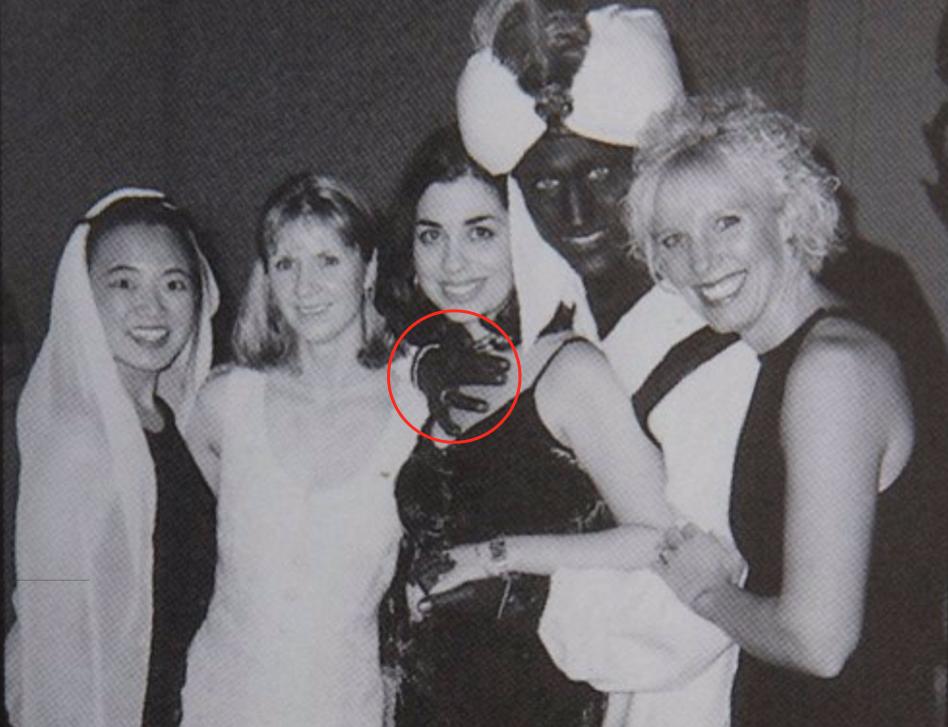 Of course, Trudeau was just 29 at the time, so presumably his defense will be that he was just young and stupid at that time, whereas now he is 48 and still stupid. So, I’m not sure that defense is going to work out for him.

But something had better work, since this new revelation comes in the midst of his campaign for re-election. The incident just adds trouble atop an already troubled situation, as Trudeau has been plagued by allegations that he improperly interfered in a corruption case against an engineering company that had been a supporter of his election. Trudeau has denied any improprieties, but two members of his cabinet felt so strongly that his administration had acted improperly that they tendered their resignations.

But hey, Northam’s own blackface photo surfaced a year ago now, and he’s still in office, living fat and happy with no one in the Democrat Party or the U.S. fake news media bothering to talk about him anymore. Given that Canada’s media is every bit as fake as America’s, you have to assume he’ll survive. After all, being a racist is fine if your politics are “correct.” Right? Right.

Kudos to Tony Heller and the Competitive Enterprise Institute – Myron Ebell and Steven J. Milloy, working in conjunction with Climate Realist Tony Heller, have published a wonderful compilation of the last 50 years of failed climate change alarmist predictions at the Competitive Enterprise Institute (CEI). Everyone should take the time to go through it.

We tend to be lulled by the massive climate scam propaganda industry into believing that climate alarmism is some sort of recent thing. But the truth, as Heller catalogs daily at his RealClimateScience website and Twitter feed is that this has all been going on in our fake news media for a century or more. Ebell and Milloy take their piece back to 1967 because that was the year that the greatest climate fraud before Al Gore, Paul Ehrlich, began to come to prominence in the media, using his dire predictions at the time of a new ice age that was always just around the corner.

One early Ehrlich statement, from 1969, that really grabs the attention is this one from an article in the reliable old New York Times: “The problem with almost all environmental problems, says Paul Ehrlich, the population biologist, “is that by the time we have enough evidence to convince people, you’re dead.”

And yet, here we are 50 years later, somehow still alive, and with the fake news media still somehow referencing Ehrlich, who has alternately said we’d all be dead from an ice age, overpopulation, famine, the ozone hole, acid rain and global warming, as some sort of credible figure on the subject.

So, what has really happened over that half-century span, as alarmists have worked to raise public fears over all manner of environmental problems, both real and imagined? Our environment has almost immeasurably cleaner, thanks to the miracle of human ingenuity and technological advancement.

The ice age that Ehrlich predicted to come by the 1990s never came. Nor did the mass famines he said would kill billions by 1980s due to overpopulation, thanks to gigantic advancements in crop yields and food distribution networks. According to data compiled by the World Bank, almost half the global population lived in extreme poverty in 1970. Today, fewer than 10% do.

Remember acid rain? That problem was effectively dealt with and today is almost non-existent. How about that hole in the ozone layer? Remember how that was going to kill everyone when it was discovered over Antartica in 1985? This week it was reported to be the smallest it has been in decades, thanks to technology and human ingenuity.

In the 1970s, due mainly to lax regulation of coal-fired power plants and car emissions, the air in the United States was frankly putrid, dangerous to breathe in places like Los Angeles and New York and Pittsburgh and Detroit. Today, thanks to advancing technology and human ingenuity, our air is light years cleaner. Indeed, the successful removal of well over 95% of all real pollutants from our air was one of the motivations for the alarmist community to shift focus to claiming that CO2 – the very basis for life on earth – is now a danger.

Also in the 1970s, water in the U.S. was a horror story in many parts of the country. Rivers were still used by cities as outlets for raw sewage flows. The Cuyahoga River in Cleveland was so dirty and filled with refuse from refineries and other industrial plants that it actually caught fire in 1969. That incident and other horror tales led to the passage of the Clean Water Act shortly thereafter, and thanks to human ingenuity and technological advancement, water all over America is vastly cleaner today.

All of those things and many more have happened in the last half-century, since Ehrlich predicted we’d all be dead because nobody cared.

It turns out that Americans care a lot about the environment. What Americans don’t care much for is being constantly lied to by charlatans and scammers like Ehrlich, Gore and the climate alarmist fear lobby.

Thanks to Ebell, Malloy and Heller for reminding us all of that today.

VA term limits their governors to only one four year term so Northam is gone in 2022 (2021 election). Since the corrupt state AG won’t prosecute, and public outcry won’t force him from office, unless he was a republican, VA will still be rid of Northam relatively soon. If they are smart (I used to live there and know that there are a lot of stupid liberals in the Northern VA – DC capital region, Norfolk – Tidewater area, and Richmond) they will run and elect a Trump type republican and save the state. However I fear they will probably replace Northam with their (accused) rapist (from the 2004 Democratic National Convention) African-American AG or lieutenant governor (I can’t remember which one was creditably accused of rape – the other one was also seen in blackface).

The only reason these accusations went away so quickly and quietly was because the lieutenant governor and the state AG were worse than Northam and if all three were removed the GOP state senate leader would have become the governor and we can’t have that; can we?

The new Democrat motto: Justice must be done, but not to us

Thank you, your comments are spot on also

Trudeau confirmed and most agree that African behavior is so bizarre that mimicking and wearing blackface is hilarious.

As far as the EPA goes, my objection to the Tea Party is that they wanted to dismantle it and claimed that it was an unconstitutional department (along with virtually every other department.) Since I swim in rivers and lakes, which are now relatively clean, I’m grateful that the agency has been able to get it done. Under Obumbler, though, they attempted a land grab over every possible definition of water, wetland, stream, spring and well. Mission creep by mission creeps.

I haven’t noticed any increase in water temperature in lakes and streams and rivers, except for one year over 5 years ago, when it was much hotter than normal and river and lake temperatures were in the 90s. Otherwise, summer water temps seem about the same, and have for the last 30 + years.

Now the EPA is going to put to proper use in San Francisco, which is sending street runoff into the Bay because the city refuses to do anything about the homeless population pooping up the streets and dropping needles everywhere.

“Obviously I regret that I did it,” he said. “I’m pissed off at myself, obviously.”

Why wasn’t he pissed off back then? Or in years after?

So pissed, was Truduhh, that he continued to rise to his present position of power, never once considering that he was NEVER fit for office, not from the beginning, not ever. Canadians should be more pissed off than Truduhh, and remove the nasty bugger from office.

Same goes with Ralphie Northam. These guys remind me of the MI6 clerk (Fields) who slept with Bond in Quantum of Solace:

Fields: “Do you know how angry I am at myself?”
Bond: “You must be furious.” (as he kisses her back and shoulder)

Northam and Truduhh are like the character Fields in that scene.
Only difference is, we don’t know who plays Bond in their personal scenarios.

He’s pissed off he got found out, & it ends there.