Well, President Donald Trump has yet another new “challenger.” – Complete with blaring headlines at the increasingly leftwing Drudge Report, South Carolina Congressman and former Governor Mark Sanford has decided to jump into the race. He joins former Massachusetts Governor William Weld and former Congressman Joe Not-the-Eagles-Singer Walsh as a kind of NeverTrump cordon of sacrificial lambs who I guess will try to raise money and run in the various caucuses and primaries.

All three of these guys are your basic circus clowns. Weld is an ultra-liberal Democrat in a Brooks Brothers suit who does stuff like this because he can’t find any legitimate work. Walsh is a talk radio host who no longer has a talk radio program. Sanford is the guy who ran out on his family with his Argentinian girlfriend for two weeks while serving as Governor, and then claimed to have been “hiking the Appalachian Trail” when he re-surfaced.

These are the guys who NeverTrump puppet masters like Bill Kristol and Mitt Romney believe are fit to wrest the GOP 2020 nomination away from a sitting President with an extraordinary record of success. You might do better running Larry, Curly and Moe. At least they’d be entertaining.

Fauxcahontas Rising. – Despite the ongoing best efforts by our fake national news media to cover for his increasingly obvious loss of his faculties, the nation’s Unfrozen Caveman Senator continues his slow fade in the polling data.

The latest bit of distressing news for Creepy Uncle Joe comes from the CBS News Battleground poll of early primary/caucus states. This poll attempts to measure voter attitudes in the 17 states that will take us through Super Tuesday next March 3. Those 17 states include Iowa, New Hampshire, Nevada and South Carolina early on, and then conclude with both California and Texas in March.

Thus, it isn’t surprising that both Kamala Harris and Irish Bob O’Rourke land among the top 6 Democrats in overall support in these early states, given the massive presence of their respective home states. It is a little surprising how poorly those two fare overall, with Harris coming in at 8% support and O’Rourke barely registering at 4%.

But it’s the top of the rankings that really matters, and coming in at #1 in terms of overall voter support is not Joe Biden, but Fauxcahontas, the biggest fraud in the race. Which should surprise no one, given the historic Democrat voter preference for lifelong frauds like John Kerry, Al Gore, Barack Obama and Bill and Hillary Clinton to be the standard bearer for their party.

Little Mouth Always Running comes in at 26% support among the registered Democrats surveyed in these 17 early states, with Creepy Uncle Joe close behind (as he always seems to be with the nearest woman) at 25%. The Commie registers at 19% and Mayor Pete makes a cute little political sandwich in between Harris and O’Rourke, landing at 6%.

Those percentages are a little misleading, though, because the delegate count is what would really matter. CBS projects those numbers in this table: 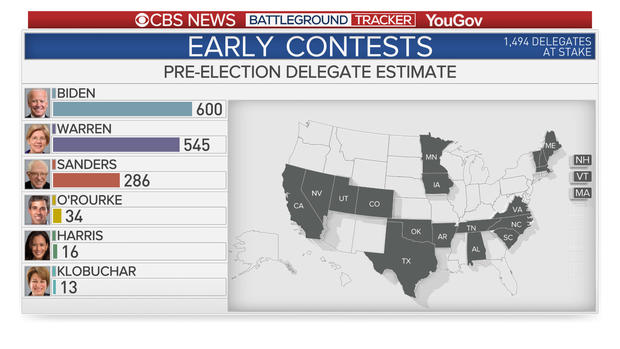 So, the Unfrozen Caveman Senator retains a slight edge in that measure, though far short of the 748 he would need to constitute a pace to win a first-ballot majority at the DNC Convention. And looky there: Amy Klobuchar jumps into the top 6 to replace Preacher Pete, who is nowhere to be seen.

In keeping with its campaign to prop up the Serial Gaffer, CBS leads its write-up on the poll by saying, “This poll tells a story of Elizabeth Warren rising. But not Joe Biden falling.” Which is, of course, abject nonsense.

Let’s go back to April, when Biden announced his candidacy. Then, he started this race with a huge, 20+ point lead in pretty much every poll, registering at or above the 40% level in all of them. In this new poll, just five months later, he’s down to 25% in the 17 states that will essentially decide the race for all intents and purposes, and now trailing a woman who has spent her entire adult life pretending to be someone she is not for professional and financial gain.

True, he is still doing slightly better in the national polls, where he’s averaging about 29% support in the RealClearPolitics average. And the lead he still owns is due strictly to two factors: Very strong support among African-Americans, who don’t much care for all the radical socialists in the race, and this perception that he’s the most electable candidate in a general election against President Trump.

That’s all well and good for now, but here’s Biden’s real problem: The Democrat voter base has become ultra-radicalized, and is not likely to ultimately settle for an elderly white guy (Biden will be closing in on 78 when the Democrat convention comes around next summer) who barely knows where he is most days. Those voters are also not going to settle for an old white guy who still goes around bragging about his old segregationist pals in the 1970s Senate, and who still tells off-color jokes that demean women, Blacks and gays.

Take a look at that RealClearPolitics average again, and add up the percentage of voters who are supporting the radical candidates like Warren, The Commie, Harris, Buttigieg, Yang and O’Rourke: Their support comes in right at 50% to Biden’s 29%. That’s where the heart of the Democrat Party really lies.

Throughout the 2015/2016 GOP nomination contest, I repeatedly advised readers and clients to add up the percentage of primary voters who weighed in their support on behalf of the party’s non-conventional candidates. I included Trump, Ted Cruz, Ben Carson, Carly Fiorina and Rand Paul in that category. It was absolutely stunning how consistently their total support came in right at 63% throughout 2015 and through the early primaries. As Carson, Fiorina and Paul left the race, basically all of their support base migrated right over to Trump or Cruz, and they ended up the two finalists in the race (I don’t count Kasich, who stuck around but had basically no real support).

That was where the heart of the GOP voter base was in 2016, and the radical left is where the heart of the Democrat voter base is for the 2020 race. As O’Rourke, Yang and Buttigieg drop out of the race, and The Commie and Harris fall away later on, their voters are going to coalesce not around Biden, but around Fauxcahontas. This is pretty much baked into the cake at this point. Elizabeth Warren is really the odds-on favorite to go into next year’s convention with the highest number of delegates as of today. The big question is whether or not she will be able to the majority required to win on the first ballot.

If you think I’m crazy and still believe that Biden is the big favorite because that’s what all the “experts” are telling you, take a look at history: Since 1968, the early favorite to win a contested Democrat nominating race has only prevailed one time, in 2000, when Al Gore, a sitting vice president, became the nominee.

All the momentum in this race today is with Warren, and it’s pretty hard to see anything that will stop it. Democrat voters love a good fraud, and there is no more accomplished, blatant fraud in the race than Fauxcahontas.

Gee – I predict the WINNER of the democrat primary will be – – – ANYONE BUT TRUMP! ! ! !
Possibly their anger is interfering with their ability to “make good decisions!”

And the winner?? Gets to go against the Master of Disaster??

All you people are so heartless and mean to Warren. Just try to imagine what it’s like to grow up in a tepee.

Plus she’s got the combined assets of the three farmhands in the Wizard of Oz:
-No brains
-No heart
-No courage

Will the Democrats really put up Warren, the woman(?) who lied her way into college, and lied her way into a cushy job at Harvard by claiming minority ststus? If course they will, a woman and a Native American combination, what better choice. However I lurk in the backround! I will commit to being partially black, partially Native American, and partially Asian, along with being partially a part of the LGBTQ,(whatever that is) along with being a border jumper, welfare recipient, excriminal, and a dedicated participant in the Civil Rights Matches in the 60s. I did all of this prior to age 16 and I also Marched Against the War in Vietnam, at age 3. If that isn’t enough to make me the front runner for the Democrats I’m also graduated from Columbia, although they have no record of me being there, was a Muslim from age 2 thru 2 1/2, and joined the girl scouts although I was kicked out for nonconformity! Thank you for your support and I look forward to spending ALL of your money for illegals, welfare for all, and reparations! I will be joining the next Democratic debate, look for me there, wait I am already there but as a combination of the demo clowns!

With those credentials, you have it all!
How art thee oppressed?
Let me count the ways!

Are any of the current clowns left handed?
They need that for their CV to be complete.

Got my DNA results. I am 1024th Indian! That qualifies me for minority credits at Harvard. I can skate! No need to pass tests. No need to study. I got a free pass. I think I’ll go into politics after Harvard. I can speak English and I bathe.

Harris is the most venal, most Hillary-like of the candidates. She has increasing problems with (alleged) prosecutorial misconduct, and African Americans really, really don’t trust her. For good reason. Hillary is said to be advising her, which is good news for America all-’round!

You’re right, Dave; Biden will soon be in the wind, and saying: “there’s that duck again!” Dementia is setting in. Maybe he can contact Hillary and find some really good transfusable stuff, Adrenochrome and platelets and whatnot. And maybe he has already, and has contracted Kuru (AKA “laughing cannibal disease.”) Spongiform encephalopathy is not out of the question. Look for the back pain and itchiness.

Bernie’s message has been appropriated, and his anger is no longer cute to young people nor is it appealing, and he appears to be physically shrinking, like Butterguy’s support.

Butterguy will likely be Warren’s running mate, which is why he’s staying in the race. He doesn’t mind “bottoms,” to use a phrase he will be intimately familiar with.

I saw Sanford on the Appalachian Trail at the time he claimed – (no, wait: that was a weasel. Or John Podesta.) Wherever he was, I’m sure he ate well.