Tired of all this #WINNING yet? – Late Friday evening, the U.S. Supreme Court reversed the absurd lower court ruling by an Obama-appointed judge denying the President his clear constitutional authority to redirect unused funds from the military budget towards the building of the wall along our southern border. Let us never forget that the building of that wall was fully authorized by the U.S. Congress during both the Bush and Obama administrations, and those bi-partisan bills were signed into law by those two ex-presidents.

For now, $2.5 billion in funding is freed-up to begin construction on at least 100 miles of new border wall, although the ACLU, in its never-ending efforts to obstruct everything the Trump Administration does, vowed to move to accelerate a separate case it has pending before the ever-reliable 9th Circuit Court of Appeals. Thus, the shameful, un-American Lawfare effort set up by the Obama Administration in its waning days will continue in this case.

Tired of all this WINNING yet? Part II. – It has been a week of extraordinary WINNING for President Donald Trump and his administration. Soooooo much winning that it’s seriously hard to know where to begin. Let’s look at a few of the more notable items, starting with the most obvious:

The Mueller Witch Hunt is now officially over and dead. – Try as the Democrats and fake news media might to pretend otherwise, Robert Mueller’s moribund, doddering appearance before two kangaroo court congressional committees this week ended any thought that his despicable investigation would provide some sort of roadmap to impeachment, as the DC Swamp had hoped it might. Oh, the Democrats will continue to pound on their lost arguments over “obstruction” and “collusion”, but those arguments have always been false and Mueller’s two-year effort failed to provide them any foundation in reality.

Because our news media is such a Dumpster Fire of Fake, it takes the public awhile to catch on, but a clear majority now are sick and tired of the entire charade and the needle continues to move in the direction of truth. So this ugly chapter in our nation’s history – brought to us by the Democrat Party and its media toadies – is effectively over.

New record highs in the stock markets. – Despite the best efforts of the swamp snakes at the Fed to hold the economy down, this week saw a renewed surge in corporate earnings across the breadth and depth of the U.S. economy. That surge led to the setting of yet more record highs in all of the major stock indexes, benefiting the various types of retirement funds held by tens of millions of ordinary Americans.

Economic growth beat expectations. – Although it came in at an Obama-like 2.1%, U.S. GDP growth for the second quarter beat “expert” expectations by a significant margin, and the economy appears to be resurging after a slow April and May.

Cop abuse videos from New York City go viral. – As Democrat/Communist Mayor Bill DeBlasio runs around the country pursuing a vanity campaign for president, a series of videos emerged this week showing gangs of thugs in his city pelting police officers with water balloons, buckets of water and other objects, humiliating them as they cower and retreat in compliance with the Mayor’s orders. This idiotic, disgusting policy will inevitably lead to more and more aggression until police officers begin to be seriously injured or even killed. It is a repugnant display of cowardice and horrific leadership brought to America purely by Democrats.

The Squad is now fully in control of the House Democrat Caucus. – As her final action before fleeing the nation’s capital for her 6-week “August recess” (I’m old enough to remember when August only contained a little over 4 weeks) Pelosi felt compelled to hold a special meeting with the leader of The Squad, Alexandria Ocasio-Cortez. That meeting produced this cringe-inducing image, as Pelosi’s pasted-on smile looks to be on the verge of melting off her plasticized face: 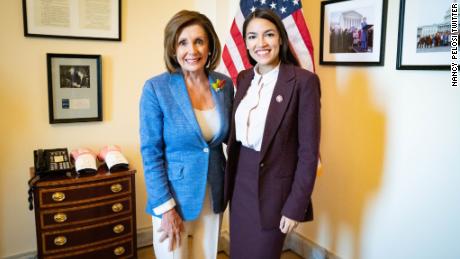 Seriously, which one of these women appears to be actually happy, and which appears to be ready to claw the other one’s eyes out?  This is not a trick question. Having AOC and the other three raging anti-Semite Squad members fully in control of the House Democrat caucus is political nirvana for Donald Trump. These four spoiled, attention-seeking children’s antics will provide the President with a never-ending flow of fodder to toss back at the Democrats throughout his re-election campaign.

Bottom line: After the November, 2020 elections have come and gone, the President has been easily re-elected, and the GOP controls large majorities in both houses of congress, we will look back on this fourth week in July, 2019 as the week the tide fully turned.

The week was that good.