[Editor’s Note: The Campaign Update will be silent from July 11 through July 23 because Dave needs some down time.]

The world mourns the loss of a leftist hero. – Americans all over…well…somewhere were saddened on Monday when Democrat presidential non-contender Eric Swalwell, who famously promised on Twitter to nuke recalcitrant citizens (see below) who refused to surrender their guns to his planned army of jack-booted thugs, announced he was ending his campaign. Swalwell had run a valiant, disciplined and focused campaign, one that saw him rise all the way up to next-to-last place in the race, reaching as high as .000001% in the polls before the first debates two weeks ago.

Sadly, this turned to to be the point of Peak Swalwell.

After what critics unfairly labeled as a “laughable,” “cartoonish,” and “is this guy really serious?” debate performance saw his poll standing fall to .00000001% in the polls taken afterwards, Swalwell reassessed his chances. Realizing that not even appearing on the same stage with the likes of Kirsten Gillibrand and John Hickenlooper had helped his standing with potential voters, Swalwell decided to throw in the towel (if only he could have been on-stage with Beto O’Rourke – then he’d have appeared almost normal). The decision point apparently came when he saw that his popularity had fallen even below that of the despicable and buffoonish Bill DeBlasio.

So back to congress he will go, where he can once again take up the gauntlet as CNN’s second-favorite liar about the Mueller Report, right behind his fellow California congressman, Adam Schiff.

“We have to be honest about our own candidacy’s viability,” Swalwell told reporters at a press conference Monday. “Today ends our presidential campaign, but it is the beginning of an opportunity in Congress with a new perspective shaped by the lives that have touched me and my campaign over the past few months.”

Neither of the two residents of Dubuque, Iowa whose lives apparently touched Swalwell were available for comment. Both were too busy cooking up a new batch of meth. 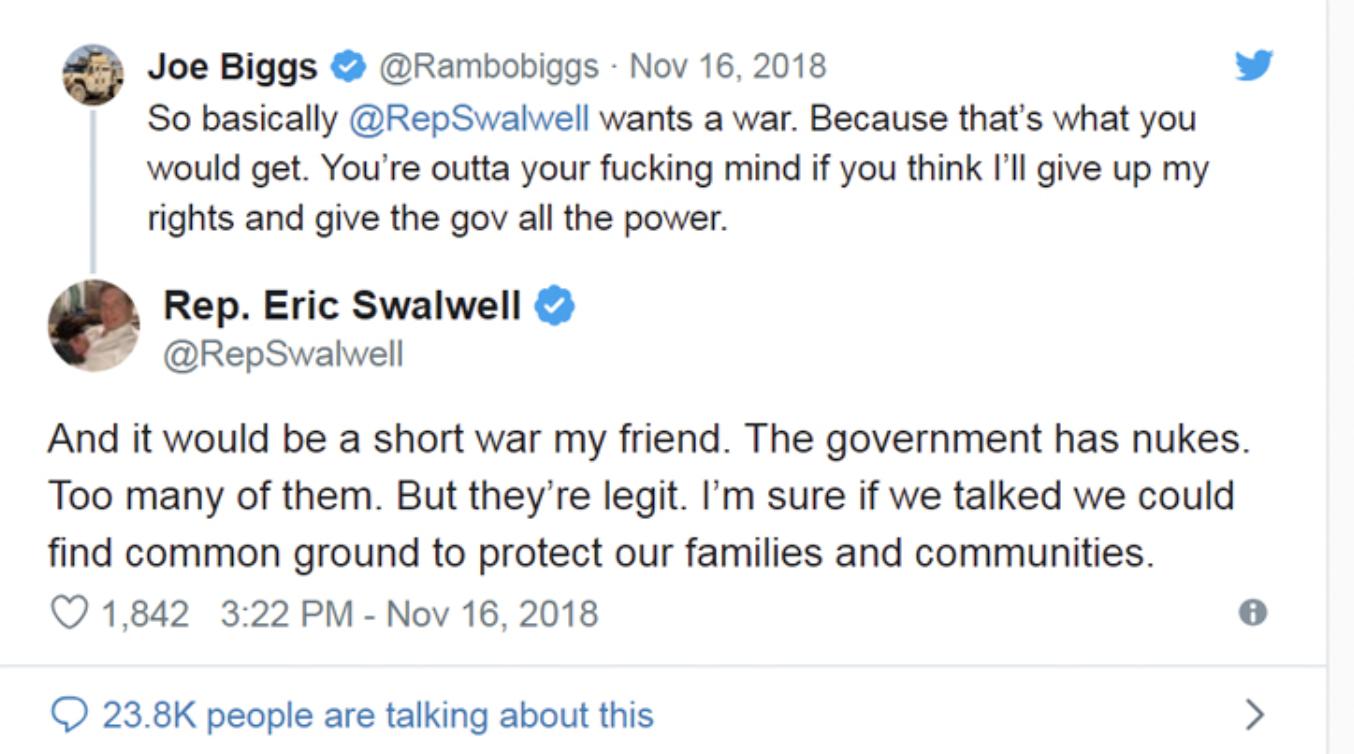 We barely knew you @ericswalwell, may your campaign live on forever in our hearts. pic.twitter.com/25U8XtGjow

But never fear, for Tom Steyer is here! – Yes, friends, just when things look their darkest, a new self-serving light appears on the horizon. Self-styled “environmental” activist Tom Steyer – hey, did you know he amassed his fortune investing in coal? – plans to jump into the race today.

You may remember Steyer. He’s the guy who famously spent tens of millions of his own money in 2017-2018 on a series of TV ads promoting the impeachment of President Donald Trump. He is so personally repugnant on television that the ads actually caused the President to go up in the polls.

Oh, so he’s just like Eric Swalwell, but with a lot of money?  Yes, that guy.

Steyer is a one-trick pony, a pony whose one trick is exactly the same as Washington state Governor Jay Inslee, another sort-of-candidate who is polling at .000000001% in the presidential horse race. So Steyer apparently plans to swoop into the race, scoop up Swalwell’s .000000001% support and fight it out with Inslee over how to destroy the U.S. economy to fight the bogeyman “Climate Change.” The “winner” would presumably then have .00000002% support and be on a bullet to overtake DeBlasio for next-to-last place.

After that, he would obviously target Gillibrand and her .00000003% support, and be off to the races.

No telling how many millions Steyer is willing to part with in order to achieve his goals, but a fool and his money are soon parted, and Steyer has billions to part with. So, it’s probably a lot.

If they didn’t actually exist (which I’m assuming they actually do, though I have no real proof), the greatest fiction writers in world history could never come close to making these Democrats up.

While several of the Democrat candidates are terrible, Swalwell was 100%, beyond the shadow of a doubt, the worst . . . . not just irrational or stupid or uninformed . . . . but an incarnation of evil. What a total waste of a human being. It is fitting for Swalwell to be the first voted off the Island – suggesting that the primary system can at least eject total refuse quickly. Probably the next ones off will be the completely fake Gillibrand (not nearly as repulsive as Swalwell but Swalwell was in a class by himself, a level known only to Hillary Clinton) and the unimpressive Inslee, Gravel, Moulton and Sestak.

Steyer is interesting as the most transparent incarnation of the system. Billionaire donors and multinational donors control the Democrat party. In classic fascist mode, they fund the corrupt party claiming to be the party of the people, in order to get crony capitalist benefits and buy immunity from attack. Much like the German industrialists who supported Hitler. He hates Trump because Trump is also a billionaire, a member of his club, but one who went rogue, believed in America, and followed the policies necessary to restore America to greatness benefitting the people even when those policies were disadvantageous to the multinationals and crony capitalists. It will be interesting to see how far Steyer is able to buy his way into the Democrat campaign. I think he will have a hard time getting through the initial states where personal contact and politics makes a difference – Iowa, New Hampshire and South Carolina.

Personally I hope they all hang in, they all take a page from the book of Harris that launching mud-slinging attacks is the way to increase your standing, and we get an open debate surfacing all the flaws and pushing each other further and further left. The ideal outcome would be a divided convention, a contested nomination, a bankrupt candidate and a Trump crushing Democrat by Nixon vs McGovern margins. That would do two good things for America. First, it would enable Trump to complete the MAGA program – deregulation, further tax reduction, reducing the size of the federal government, tight control of immigration focused on ability and skills, rebuilding the military and start a convincing Space Force, renegotiating our trade treaties, and extracting the US from the vast majority of the unending, unwindable wars we are dissipating our resources on – so that we can focus on building a convincing deterrent to and expansionist China. The second good thing would be that a far left Democrat candidate like Sanders or Warren getting utterly creamed as McGovern was, will prompt the party to return from la la land to actually focus on useful policies.

Personally, I would rather one of the turds (preferably the most leftist in the Democratic toilet of candidates) would float to a convincing win in the primaries so we do not get a brokered convention where a relatively unblemished and uninjured “outsider” could be chosen by the party’s insiders to run against Trump. The nation will already be sickened by the winner and the party will also be broken (both morally and fiscally) with all the time, effort and money spent on selecting their standard bearer to take on Trump.

Another good thing a second Trump term would be to continue to transform the judiciary.

Regarding the second good thing you stated about forcing the Democratic to reform itself… I don’t think the people who run the party are capable of change which is good because it will further diminish their power for years to come. Decent people who, for whatever reason, have chosen to still identify as democrats will “walk away” in greater numbers and no true “moderate” or “independent” will vote for any Democrat for many election cycles to come. Perhaps some “moderate” Democratic politicians like WV’s Manchen, or PA’s Casey will see the light and switch to the GOP.

Well, it is early in the “silly season”, that being the election of a POTUS in ’20. Gonna be a long season. With Steyer jumping in, it is gonna prove to be a painful one, too. Having to listen to all that leftist(commiecrat) bs until the election of Donald J. Trump again, may be just the impetus to ramp up his re-election to gigantus proportions.
Which means there will the gnashing of teeth and virulent screaming at the sky prior to the election with much more to follow.
Fun times. Don’t forget to laugh at the silliness from the leftists until then. Guaranteed they will say plenty of illogical nonsense re: climate, guns, illegal aliens(border security), free stuff for all, etc.
Just sayin’.

Enjoy your time off, DB.

Steyer looks like a wind-up cat doll that looks both frightened and mangy. The kind used on SNL when it was funny, if memory serves (since that was such a long time ago.) Steyer is Bloomberg minus 60 IQ points.

Kama “Sutra” Harris won’t ever get the young vote, since they all know and understand the term “walk of shame.” How do they feel about people who boff the professor for a grade, like she did with Mayor Willie (or is it the Mayor’s willie?) About the same as they feel about the old lady pretending to be Native American in order to benefit from programs for “people of color,” I’m guessing. Neither of these frauds will gain a following among the young and the listless. And Bernie is being recast as a lead ghoul in Night of the Living Dead (part 6) and cannot be resurrected, even with a space virus. Others?

Ms. “Gilligan” is as appealing as a ratburger smoothie.
Hickenschtupor who?
C. Booger? C. Booger run. C. Booger drop out.
“Birdman” O’Rourke will migrate, as birds with big wings usually do; seems he tried to go south recently, but was shooshed back north by the sound of firecrackers, which is what they usually do to deal with invading vultures.

I started out thinking Kamala Harris would be the democrat nominee then wavered a bit since she is so snarky. However after her debate performance I am back on Harris due to the intersectionallity thing.

Going to miss your updates; enjoy your vacation, but it does coincide with Mueller’s “testimony” and perhaps the IG’s long delayed “report” on the FISA abuse. Your fans will want your take on these events retroactively when you return.

Steyer is joining the race, ho hum…, one of these turds is going to eventually float to the top of the Democratic toilet bowl only to be screwed at their convention one way or the other.

So this faux “environmentalist” made much of his money in coal; just another leftist hypocrite!

If NY releases Trump’s state tax returns, then I want to see every Democrat’s tax returns including all of the members of Congress. I have always wanted to know how people of relatively modest means get into congress become so wealthy on less than $200K per year. And how do the people who own/run these phony “industries” that produce no product and little service such as Uber, Facebook, Twitter, regular Media, and much of the banking/investment industry become multi-billionaires. There is something very wrong about how all this wealth is being “earned” by all these leftists. Yet the only known conservative/libertarian political players/donors are the Koch brothers (they are really open borders, closet liberals who often support RINOs) and they are vilified when they spend any money to help Republicans win a race every now and then.

Thank you John McLaime, George Bush Jr., and a feckless supreme court for giving us their unconstitutional version of “Campaign Finance Reform” of the early 2000s; it really got the corrupting money influence out of the American political process – snarc.

It is time for the president to find a way to expose how all the swamp creatures got their wealth, and how they use it behind the scenes to subvert America – he needs to expose these internal enemies.