Another Trump tour de force. – One day after giving possibly the greatest pro-America speech ever delivered by any U.S. representative at the United Nations General Assembly, President Donald Trump (I still never tire of typing those three words) conducted one of the most amazing, wide-ranging press conferences ever conducted by a president in an international setting.  It was filled with humor, biting commentary on current events, amazing new nuggets of information (such as the President’s preference that oily Rod Rosenstein stay on the job at least for now) and even another humiliation of CNN’s pathetic, preening peacock Jim Acosta.

Some of the best highlights of the press conference can be found here.  You can no doubt watch it in its entirety at any of a dozen places – just Google it.

The takeaway, though, is this:  President Trump should be doing these press conferences far more often.  He is far and away his own most effective spokesman, and he needs to stop allowing his communications advisors to bottle him up.  He should hold a presser just like he did yesterday every Friday afternoon and let it dominate the news cycle for every weekend.  It is maddening that he continues to take such bad communications advice from his team.

I think this latest stunt is going to completely backfire on the Democrats. I think it is so outrageously unbelievable that it is going to infuriate millions of ordinary Americans who might have to this point been on the fence about the nomination.

So now we are expected to believe that, during the course of SIX of these intrusive investigations, the FBI failed to come across a shred of information from any of the hundreds of people they spoke with about a drugging, rape-train operation that Kavanaugh and several friends operated for more than TWO YEARS?

I have never been more disgusted in my life about anything outside of my own personal behavior than I am right now. I swear, if I was in the same room as Avenatti today, one of us would not leave it alive.

This is vile, demented and just plain evil.

Here’s a personal incident that illustrates just how utterly ridiculous this woman’s claim truly is:  In the summer of 1974, a friend and I got the big idea to imitate the streaker who ran behind David Niven at that year’s Academy Awards show by streaking through the parking lot at a local Circle K food store where our high school friends liked to gather on Friday evenings.

Within about 30 seconds of our little frolic across the asphalt, a call from a horrified fellow high school student had gone into the local police department, and my pal and I were arrested a few hours later.  That’s how socially unacceptable doing such a thing was in a small town in America at that time.

Because, after all, this…is CNN. – Some anonymous guy “came forward” yesterday afternoon to accuse Judge Kavanaugh of raping an unidentified woman on a boat in 1995.  When it was within an hour revealed that this guy was a nutjob who has made violent threats against President Trump, he withdrew his accusation.  Naturally, many hours later, CNN still has an uncorrected report up on its website claiming this clown’s accusation represents a fourth accuser.  What else would we expect?

The Fake News Media – depravity’s willing facilitators. – That brings me around to the actual point I want to make in this long and winding piece, which is that the Democrats feel free to engage in the vile, evil, demented behaviors in which they have engaged related to this nomination (and everything else for that matter) because they know they will never be held accountable for doing so by our fake news media.

While most of us – me included – have expressed our disgust over what we have witnessed during the confirmation process by targeting the Democrats who have organized and paid for all of it, that is really missing the point to some extent.  Because the root of the problem here is that our country no longer has a legitimate, functioning fourth estate.

The freedom of the press guaranteed in the first amendment to the Constitution was placed there because the founders of this country knew it was critical to have a free press that would hold those in power accountable for their bad actions.  The history of mankind that had gone before the founding of our country clearly told them that, where no such accountability exists, political organizations would almost without exception resort to destructive behavior in the pursuit of political power.

In our society, the role of the free press is supposed to be to serve as that watchdog, that entity that will inform the public whenever the members of either major party engage in behavior that is destructive to the foundations of our republic.  Sadly, in recent years, our major media outlets have completely abandoned that role in the name of the pursuit of their demented view of what constitutes “social justice.”  The belief that conservatism and capitalism are evil is ingrained into their tiny minds by the leftist professors who dominate our nation’s college campuses, and that belief system colors everything they do once they are on the job.

The result is that our major media organizations, with only a handful of exceptions, now perform as nothing more than propaganda outlets for the Democrat Party, and more specifically for its increasingly radicalized voter base.  The consequence of that is what we have witnessed on our television screens for the past two years, as the Democrat Party funds and coordinates the rising level of leftist violence on our streets, and mounts the disgraceful political circus designed to destroy not just the reputation of Judge Kavanaugh, but his family and his life as well.

For all you Millennials, there is this great book called “Animal Farm” that your parents and grandparents were forced to read when they were in high school.  That book perfectly describes how a society degenerates into absolute chaos when there is no societal mechanism for holding those in power accountable for their bad actions.  You should go out to Amazon and pay a few bucks to read it, because it perfectly describes what is happening in our society today, thanks to the Democrats and their willing enablers in our national fake news media.

The basic certainty that “All animals are equal…” at the start of Animal Farm is exactly how the Democrats are moving, with Antifa and their sedition, into “…but some animals are more equal than others.” #RedWave2018

Hilarious cartoon of dogs and their comments on watching the news: 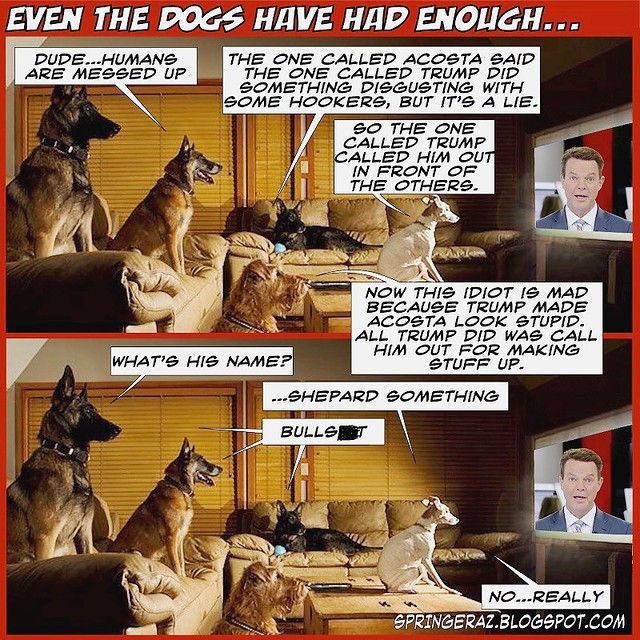 By the sounds of it, I think Chris Wallace should migrate to CNN.

It’d be interesting to make a James Bond spoof, and instead of MI6, it’d be a news organization, and the Bond character would still have a license to kill. Instead of having a license to kill reputations, character and honor, as the news does now, the Agent would instead be able to kill anyone they felt was a danger to the State.

Playing the role of Bond? CNN has a few dopes who would be good comic material.

Thanks for another incisive commentary. I think the biggest damage of the fake news media comes from the fact that they control most of that part of the media that I would call the “passively absorbed media”. This is largely broadcast media that people cannot avoid absorbing to some extent because it is spewed into the public environment by blaring radios and TV’s that people do not even seek out. This becomes the default “view” of the low-information voter and the passive citizen. To some extent it even worms its way into the minds of thoughtful, truth-seeking people. Unfortunately, most of our public air waves are owned by leftist propagandists. Constitutionalists, conservatives and libertarians are mostly confined to media that must be purchased, or actively sought out and targeted: it is not playing in the background of our lives. It is hard to reach people who are not already in our circle. Somehow, we must find a way to connect to poorly informed voters.

That could easily back fire if another party go into power. Fox news, whatfinger … bye-bye. A possible solution is by making it law that all newspapers and media outlets can only be privatized, stand alone organizations as interpreted – a free and independent press or at least a press that has to abide by some free market principles. Major donations could be accepted, taxed, and a public record made for transparency so their customers can decide if they’re trustworthy. You’d be able to track events coinciding with donations and call it out. I don’t pretend to know what organizations are owned by what major corp, but many major conglomerates own these media orgs, which means these bad media players could last for a very, very long time especially when corps have the ability to control the narrative of negative news when something goes wrong. This is the reason for the two different worlds the media has created over the last 2 years. Google, facebook, NYT, WaPo have no humility because the Democratic party covers for them and vice versa so there’s a continuous cycle of unaccountability that has led us to this point. The most of the media doesn’t even compete for viewers anymore nor for facts. Take their safety net away and restrict their ability to get capital and you’ll see a more centered, more trustworthy media because they’ll compete for reputation rather than doing their master’s bidding. It may still be left of center, but anything at this point is better than what we’re experiencing today. If they can’t compete, they go the way of the dinosaur and the individual reporter’s reputation will follow them to their next job so they would be more incline to be fair.